Music artist and voice of Unsee The Future Timo Peach co-hosts “the people’s show for changing the world” with fellow music artist AY Young, US Young Leader to the UN and creator of the remarkable Battery Tour.

How you do become a changemaker? Isn’t it a role for motivated superstar activists? It’s the question driving the new weekly online show from writer, performer, producer and environmental champion AY Young, and which tempted in the bloke from Momo to help. The Global Goals Music Roadshow meets ordinary people finding their voices about the human future, sharing their stories of projects and initiatives well under way or of their questions for how to even begin – in a lively format that reflects two natural entertainers that have clearly found each other.

“I was introduced to AY by a mutual friend, who herself kind of found me, through my consultancy work with Momo:zo” says Mr Peach himself. “Eller Everett of digital social impact team Both Of Us is such a knowledgable enthusiast for planet and permaculture and she simply said to me: “I only know of one other person who talks like you do about music and environment – I will introduce you.

“That was fateful” he adds soberly. 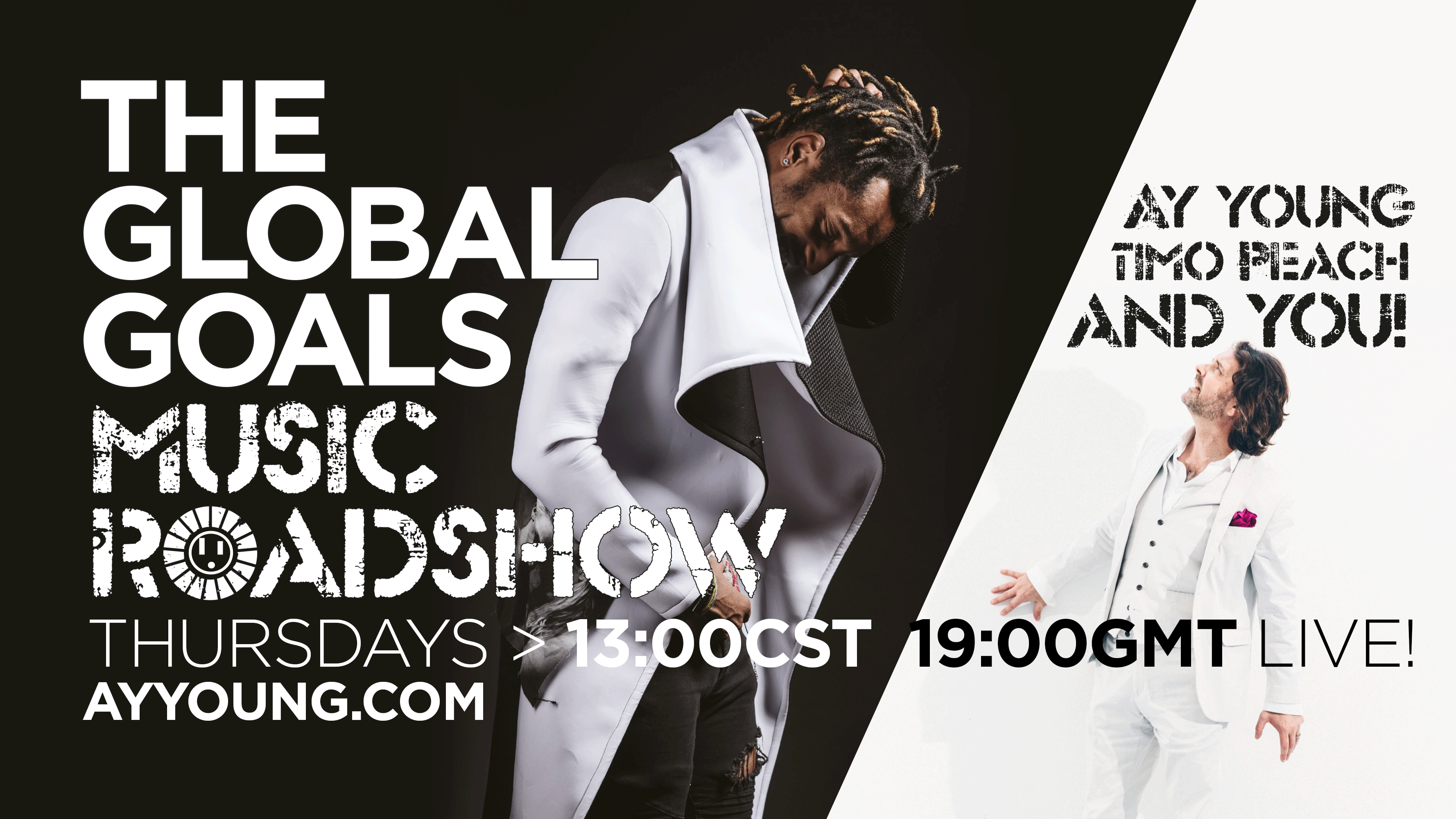 With four and a half thousand miles and twenty years between them, to say nothing of core music styles, the two artists found a kindred approach to both planet and performing.

“AY is a natural music maker. Rather like me, he can just make music all life long and inhabit it. He’s also creatively broad in it, with a beautiful versatile voice and ear” Momo enthuses. “But really, he’s an entertainer – I feel like we can trust each other on stage and take cues. And we’ve only met through screens.

“He wants to make the GG Show Saturday Night Live: The Environmental Musical. How the hell could I not be all in?”

“He’s also simply bringing star quality with authenticity about his mission. This combination is, I suspect, rare in both showbiz and music, and it infects everyone he meets, including me. He’s brilliant with people.”

That mission is one that Timo is happy to get behind. To help ordinary people plug their passions into changemaking, right where they are – and help viewers get energised about the possibilities of global transformation. Just when we so rapidly need it.

As guests share how they are becoming outlets for change, including some remarkable classrooms with AY’s Outlet Teachers, we also learn about AY’s upcoming sustainability projects following his impressive and singular Battery Tour, demonstrating how to run music shows on 100% solar and battery power.

“Yeah, he toured hundreds of shows, all over the US and some other nations, powered by solar and battery tech, and helped to raise money to leave some of that tech in less advantaged communities. It brought him to the attention of the UN and now he is the only Young Leader from the US representing the organisation” Timo explains.

The show refers to the United Nation’s 2030 Agenda and the Global Goals for Sustainable Development (17 SDGs) as a framework for supporting changemakers’ thinking in lots of different sectors, and as such covers a world of interconnected issues.

“Yes,” Timo concludes, “we explore lots of different topics to connect with in this planetary time of crisis, to help you feel like you can take part in building a better future no matter what things may look like on usual channels. Being around AY and just getting stuck in to developing this format, learning out loud together, has helped this hypocritical old utopian hitch up his socks more regularly. And being invited into all the development he’s done of this project, hearing the moving stories from people’s different experiences every week… it’s changed the way I think about my own work and approach.

“Plus, the between the two of us, the show is gently nuts” he adds flatly.

Every Thursday 13:00CET / 19:00BST
on AYYOUNG.COM supporting the Battery Tour

AY is developing his Global Goals album, 17, with the help of some big name artists and grassroots changemakers alike – 17 songs to represent 17 goals to give ordinary all of us voice about the shape of the human planet future.

“Support the tour, do one thing. Together, WE are the battery powering change.”

The Global Goals Music Roadshow is the beginnings of a media platform for sharing stories of people and organisations all trying out initiatives across the spectrum of the SDGs challenges, and it promotes the Battery Tour project AY and the team are developing. This includes:

1. ALBUM: collaborating with the biggest artists in the world to do a 17 song album. 1 song for each Sustainable Development Goal. Produced sustainably and powered by renewable energy.

3. WORKSHOP & INDUSTRY GUIDEBOOK WITH THE UNITED NATIONS: Hosting a virtual workshop that will result in a guidebook that provides a roadmap for the entertainment industry on how to tour and record an album sustainably as well as to encourage an uptick in artists using their platform for good and instill in them the willingness to act and engage more frequently on social causes.