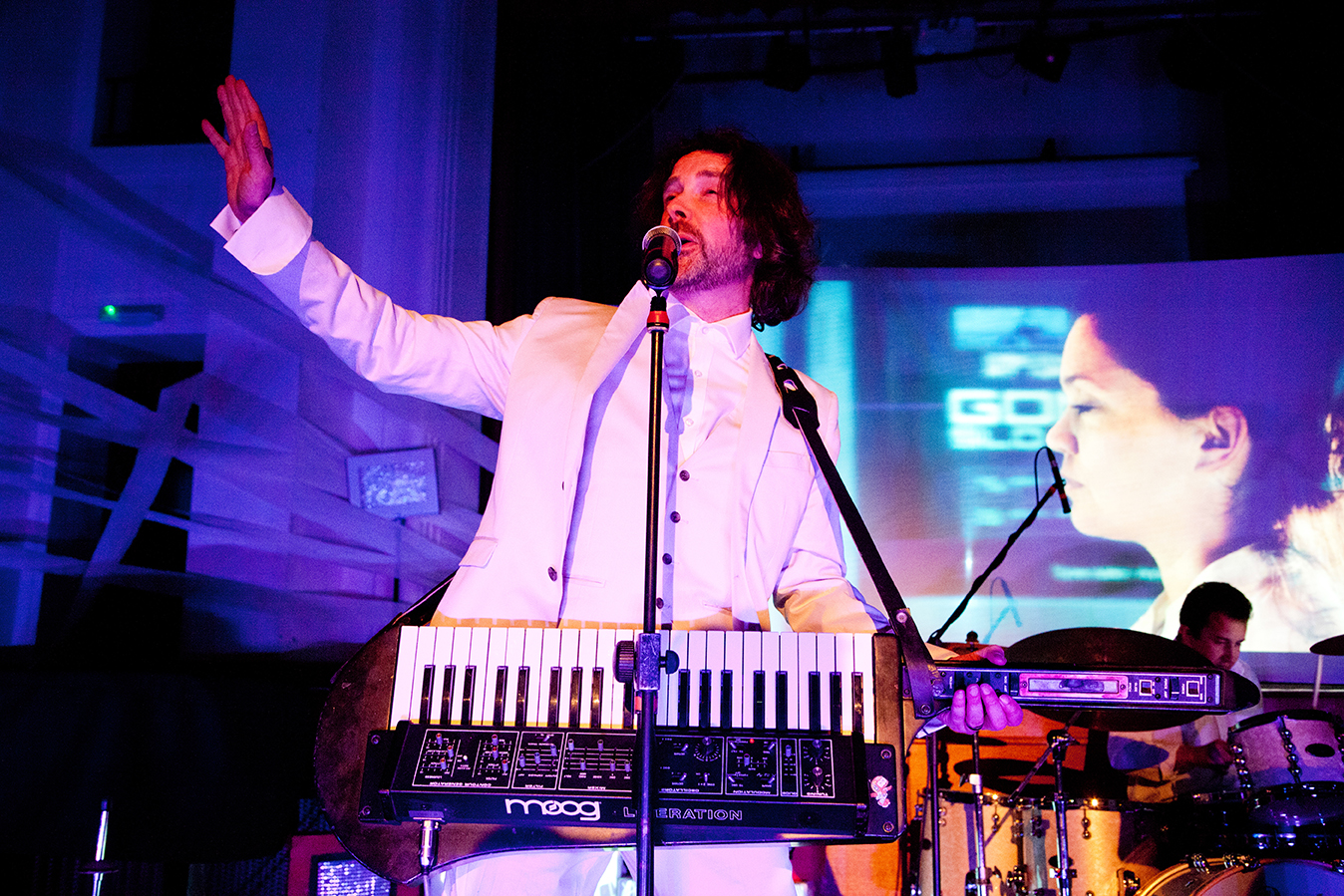 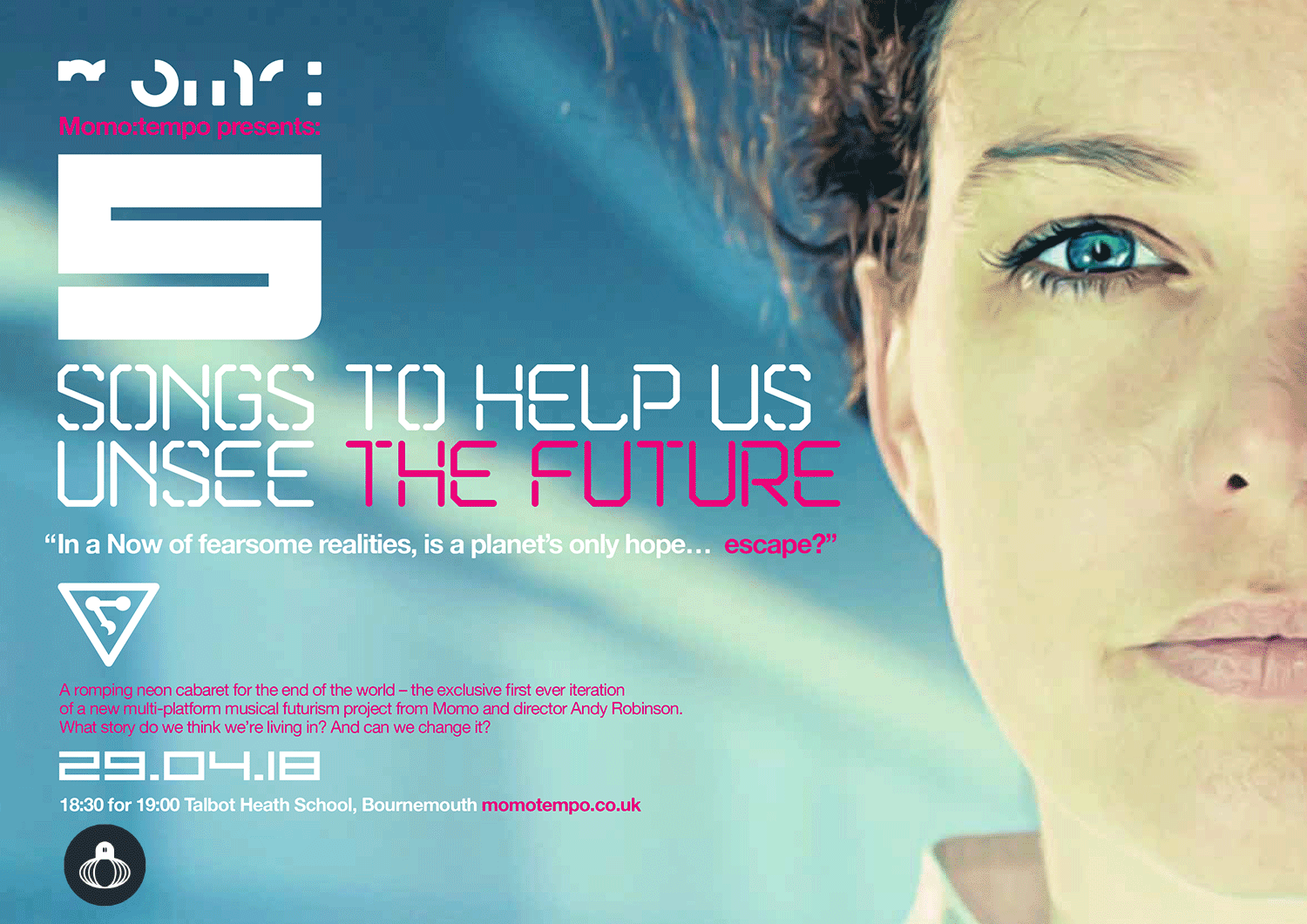 There may be another Momo:tempo LP on the way, but with a unique test-bed production, Five Songs to help us Unsee The Future performed as part of BEAF 2018, Bournemouth creative Timo Peach has taken a boldly-coloured step towards exploring a human tomorrow he thinks is about a lot more than music – a more hopeful vision of what could be possible for us all, that might only be unlocked by art. And the kind of collaboration it can inspire.

As reported by the Bournenouth Echo, it might have been more than two years in the making, but Timo Peach thinks the work-in-progress production revealing first ideas from Momo’s new futurism project is just the beginning. Disrupting the elegant main hall at Talbot Heath School for one night, the Bournemouth creative director and music maker took a select audience on a quick ride around the history of some things yet to happen, including landing the first artist on Mars… all from the perspective of the future, thanks to a special one-off show exploring the fearsome challenges of now from a more playful perspective. And all while debuting some brand new songs from the forthcoming album.

And, as the buzz built in the coridors outside the hall, guests were left guessing about what on Earth they were about to experience.

“We’d described it as a neon cabaret for the end of the world,” says the bloke from Momo himself, “which is a fair summation of the structure – songs and storytelling, talked around by two illustrious hosts, The Ghost of Future Shock and The Muse, played by my counterpart Hazel Evans. And the whole collection of elements, including scenes from an original short film and a general graphic environment, all play into the spirit of that kind of show, in a way – cabaret’s sometimes unnerving audience involvement and ecclecticism. But I don’t think anyone was expecting to be asked to blindfold themselves and hold hands with strangers before they could even begin the show!” 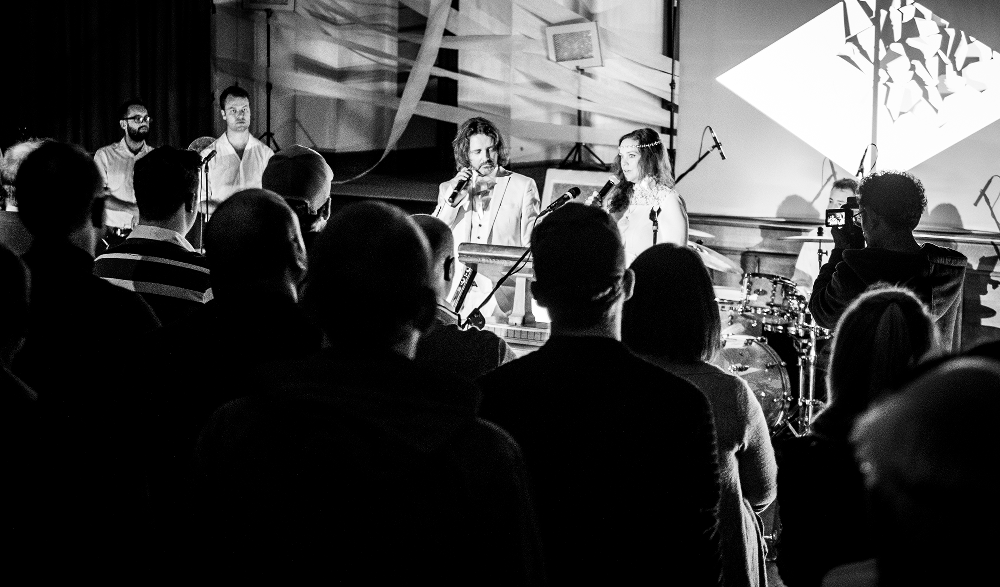 The show did set out to do the obvious – share new music from The Shape of Things To Hum, the forthcoming LP itself, from which debut single Behave New World is taken. And it was an ecclectic selection, showcasing Momo’s playful comfort with different musical moods, all celebrating some idea of electronic music’s broad creativity, and it’s capacity to fire the imagination. But the music acted more like a structural platform to tell a bigger story, with Five Songs sharing the structure that the envisioned full five-part show surrounding the tunes will take – with pre-scenes of the production’s special short film from director Andy Robinson featuring between the songs. 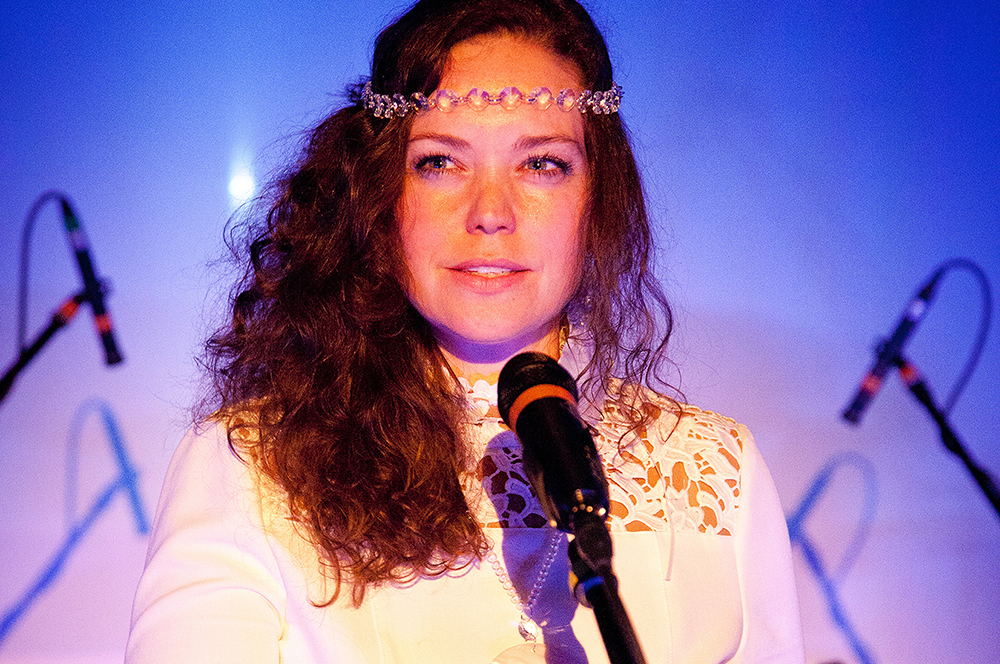 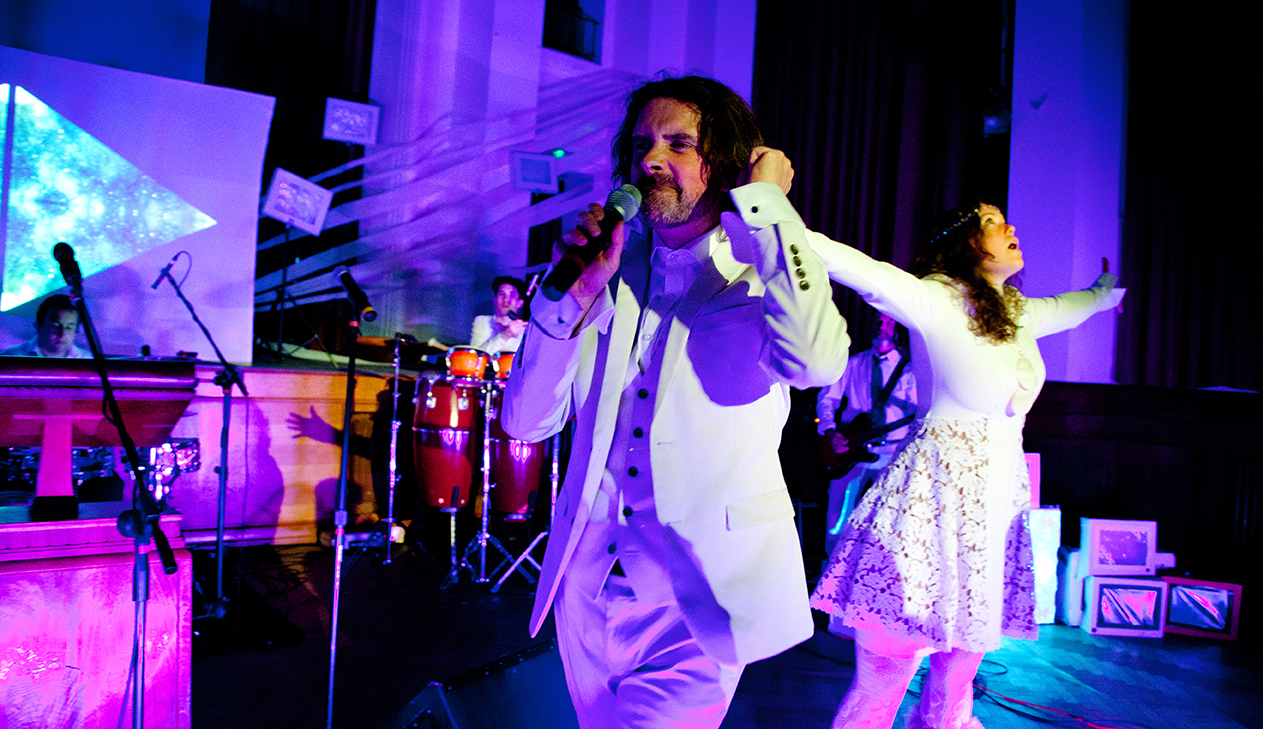 “Andy was the first person I went to about the project,” explains Timo, “because I pictured a film narrative punctuating the on-stage live daftness, and his particular storytelling voice I pictured getting it just right. So I went to him before I’d even codified the structure properly and briefed him with the general idea, which he seemed to really get.” 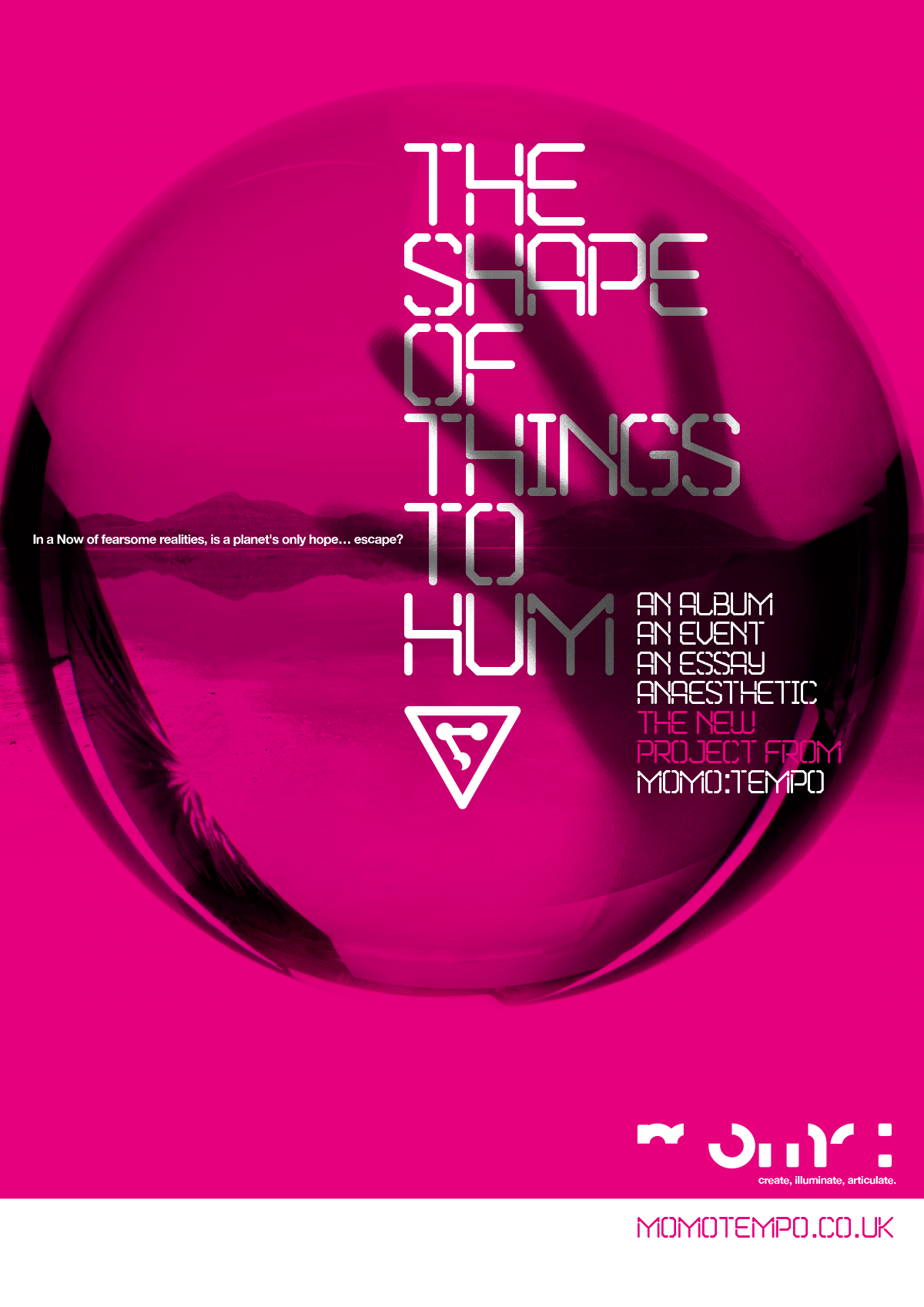 Alongside the core LP of music, the full vision for The Shape of Things To Hum is to create a motion graphic environment for each chapter of the mosaic it builds up of the story of science fiction, set in a theatre in the round and augmented with a digital element for the audience to interact with. All flowing together with a specific extra narrative turning up between the live performances – the idea always being to take the audience to Mars, as well as the further flung future and ultimately home to Now. The Now of fearsome realities we are all facing.

“I asked Andy in those earliest meetings to develop a script around the idea of a first manned mission to Mars embedding an artist on the mission” says Timo. “That was the hook. And what he came back with in the very first draft of The Martian Artist just put the soul into the entire production. And for our totally unfunded test production, Five Songs, he actually ruddy well managed to take us to Mars.”

Starring Veronica Jean Trickett as Nina Bonnestell, the first artist on a new world, the elements we saw on the night of this first public performance showed a woman saying goodbye to the tactile realities of life on her home planet, to take the risks of making a first mark on another one. A production filmed in a front room in Hove and a back garden in Exeter, says Robinson.

“We managed to take Nina to the red planet with a few judicious bits of old fashioned camera trickery, and the end effect of those shots does kind of work” director Andy smiles gently.

“I spent ages trying to find the right astronaut’s glove for one shot and nothing seemed quite right,” he says. “Then I was in Wilco one day and I saw just the right pair of gardening gloves… it was like a beam of heavenly sunlight fell upon them and I knew I could complete the shot” he laughs.

But all the elements of the production are exploring the idea central to Timo’s unfolding podcast, Unsee The Future. Namely, that in order to save the one human planet we’re currently living on, the most important thing humanity can try to do is find new ways of seeing. Ourselves and everything. The purpose, he says, of art. 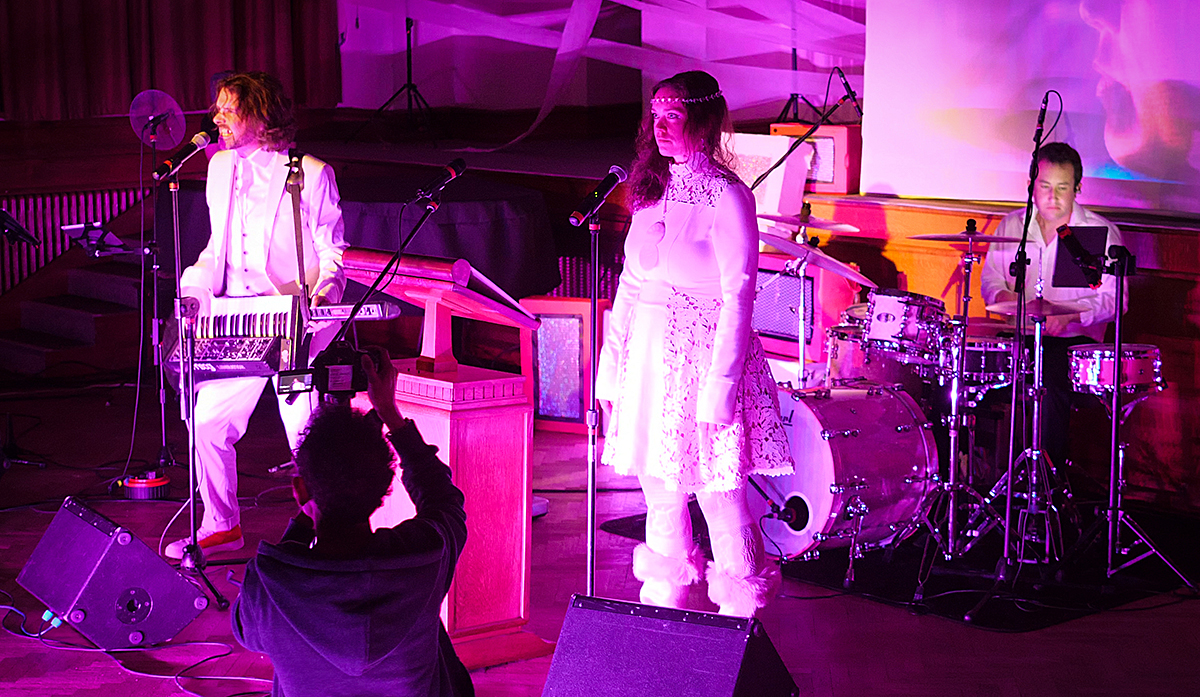 “Art is not a nice to have, once we’ve got the plumbing and security systems to work,” he says.

“Art is more than crucial to us making sense of where we are, working through our very decisions-effecting feelings – it’s crucial to where we picture ourselves going. Without those pictures, we travel blind. Thankfully, a century of scifi has been trying to show us the way.”

It’s a rich but simple idea, Momo wants to explore in later itterations of the production: Has science fiction always been teaching us the future? And might this mean we can find some hope in fearsome seeming times?

“It’s a show that I want to park up outside all manner of different ways into the subject,” Timo says. “If we can develop a way to turn the full production into a kind of UFO we can dump on the lawn of everything from Green conferences to scifi cons, science festivals to art events, we might be able to use the playful energy and suspension of disbelief to help do the one thing we are all desperate for at the moment – find hopeful inspiration. I believe it’s out there, but we have to conciously close our eyes to the old future turning us blind with its visual noise, and perhaps listen out for the still small voice of a bigger reality.”

Leaving it’s audience with much to think about, now that the first ever show is done, what happens next for Timo, Andy, Hazel and the team behind Five Songs to Help Us Unsee The Future?

“We will be sharing film of the event and putting together a whole package of material promoting The Shape of Things To Hum as a show we want to spool up from this first work,” says Timo. “It’s the job for the summer as I get into final recording sessions for the LP and go looking for the next level of support for what we have in mind. It’ll be special, if we can do it – but what will be special about it is the very thing that will make it work, and that made this debut production work: The people it draws together.”

“Weirdly, despite the experiemental nature of the work, those who gathered around it all felt inspired with just enough trust to dive into it together.” 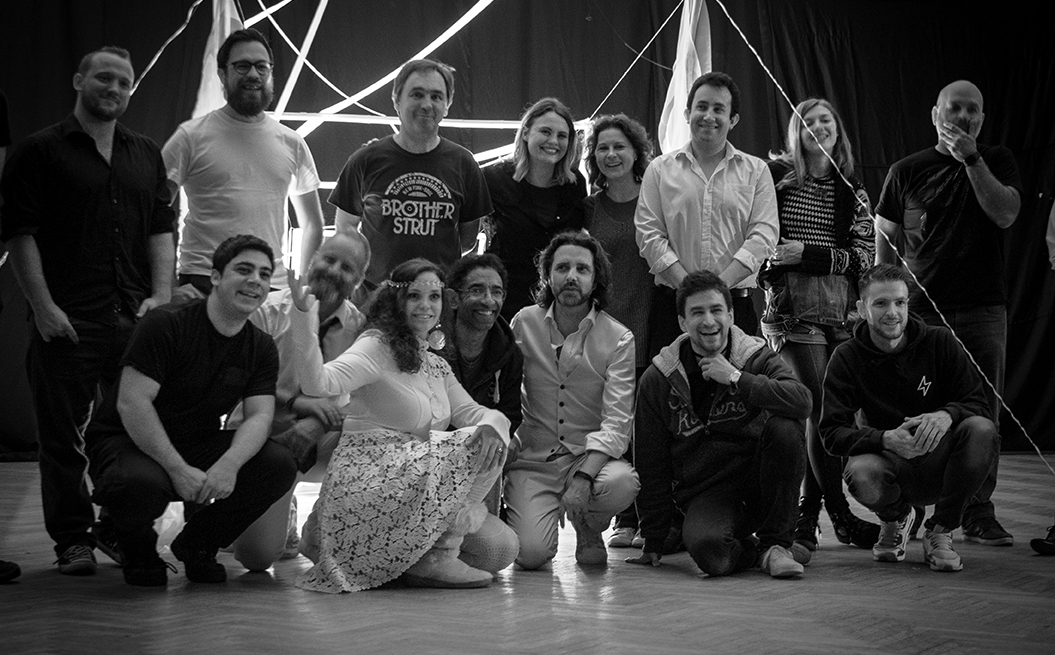 “From the amazing energies brought by Andy and also by my dear mate Hazel, both cheering this on with such time and talent, to the incredible enthuiasm of first real sponsors Octopus Farm – how much Mike and Michele brought to my belief in this project as people I’ve only been getting to know properly in more recent times. And those augmented reality posters Mike made work – a tiny brilliant foretaste of things we have in mind. And from the wonderful skills of long-time collaborator core to the Momo family Pat Hayes and the world-class musicians he helped me draw together for this one, to uplifting energisers and practical pros like production manager Becky Willis and her husband Dan, founder of Why, or Evan Grant taking a Sunday out from Seeper to bring some projection magic, or the incomparable Pete Alcock making us sound wonderful, and my first time working with Joe from Lamps & Amps, I may have never trusted a team more than with this, and been so inspired in the making together. How Becky Cutts built us a set around doing her finals I shall never know, but as ever Treehouse Digital advised us well on many things, and it was great to share their beautiful video for Behave New World on a big screen.

And the terrific presence of Veronica as Nina Bonnestell – she really embodies who we’re picturing coming to life in the whole film and she was a delight to work with. Photographer Rob Amey was a great ambassador from Bournemouth Emerging Arts Fringe, encouraging much, and it was great to just essentially stand with so many other artists in our local scene brought together by such a brilliant grassroots festival. While our official photographer Danika Westwood has done so much to capture great moments with Momo over the years.

And of course there was Mark Masters of the ID Group, who didn’t just interview me at the end to help the audience make sense of it but who has done so much to inspire, encourage and share the work I’ve been up to in all this. He’s another key energiser in this mix helping me not feel mad and alone.”

As Timo concludes, this is all an attitude any future production will have to amplify in order to happen.

“This is just what we will have to do with supporters and partners going forward. This sense of trust in shared values, wanting to inspire and champion each other. Like Alan at Absolute Music simply wanted to, as he has so much musical creativity across my home region for years – they have brilliant attitude as a business, showing how to encourage community. What will get me most excited from here is building a platform to talk about the potential new members of our future family – the people already building the future today. Technically perhaps but also in attitude. That’s who I want to meet, that’s who I want to listen to, learn from and use Things To Hum to champion. Because they’re the ones creating hope for the real human tomorrow. Who wouldn’t want to encourage that?”

Momo:tempo will be launching The Shape of Things To Hum campaign later in the summer.
Why not follow the project and Momo’s exploration of the future – join the Amigos mailing list >

Five Songs and counting: Mr Peach shares his personal take on getting a heartfelt experiment out into the open > 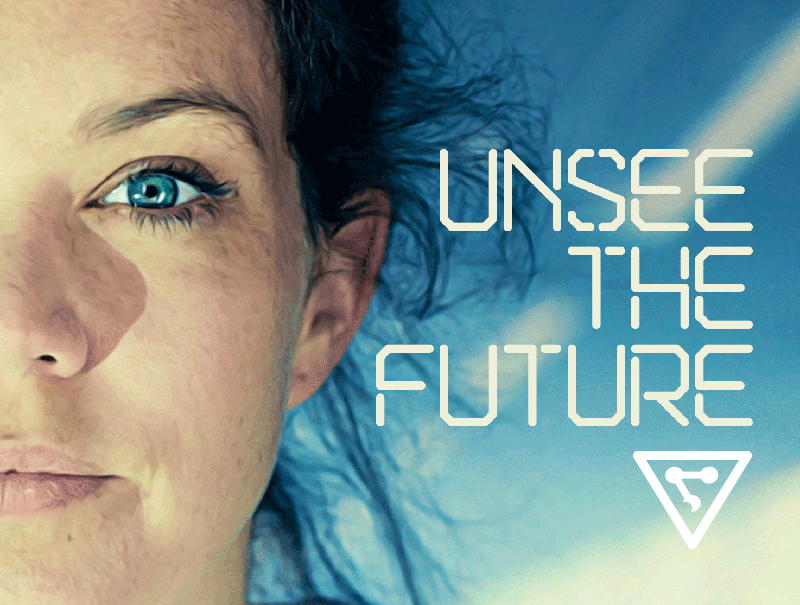 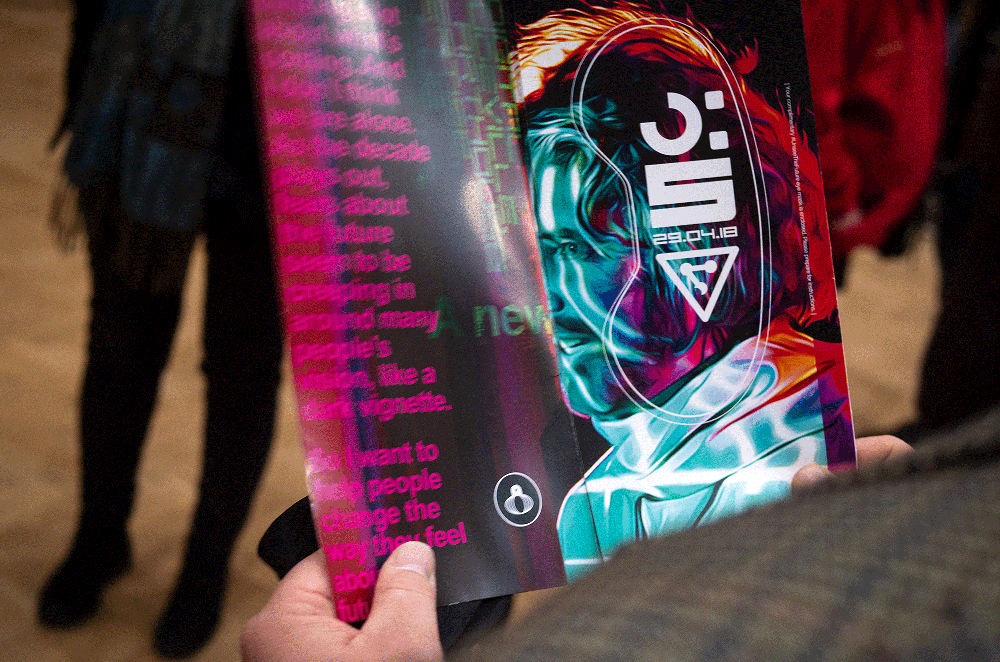 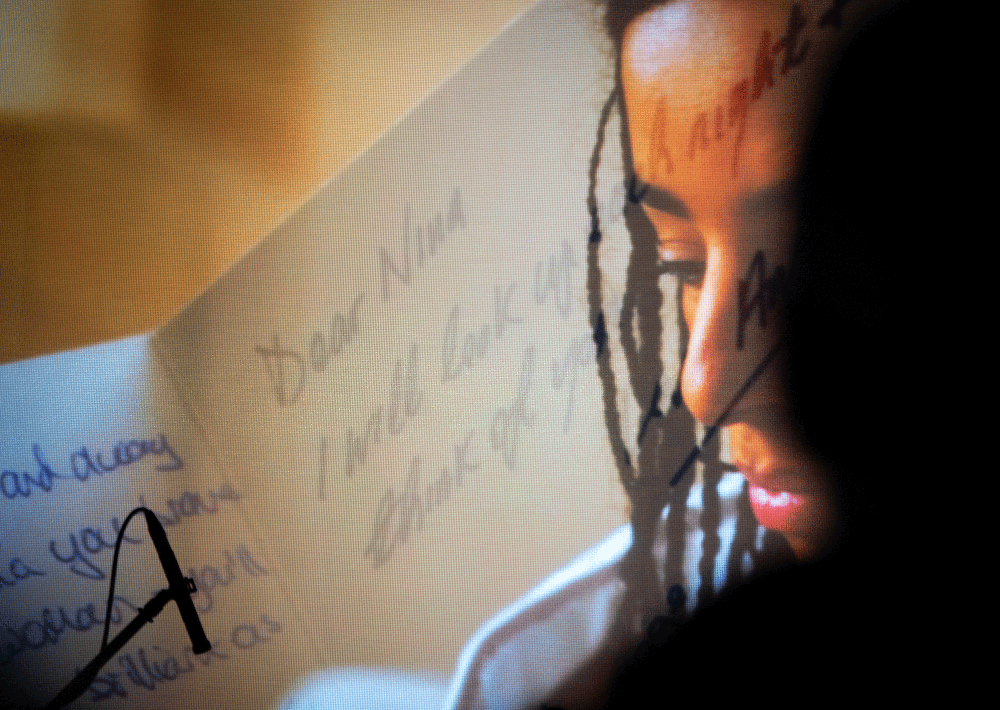 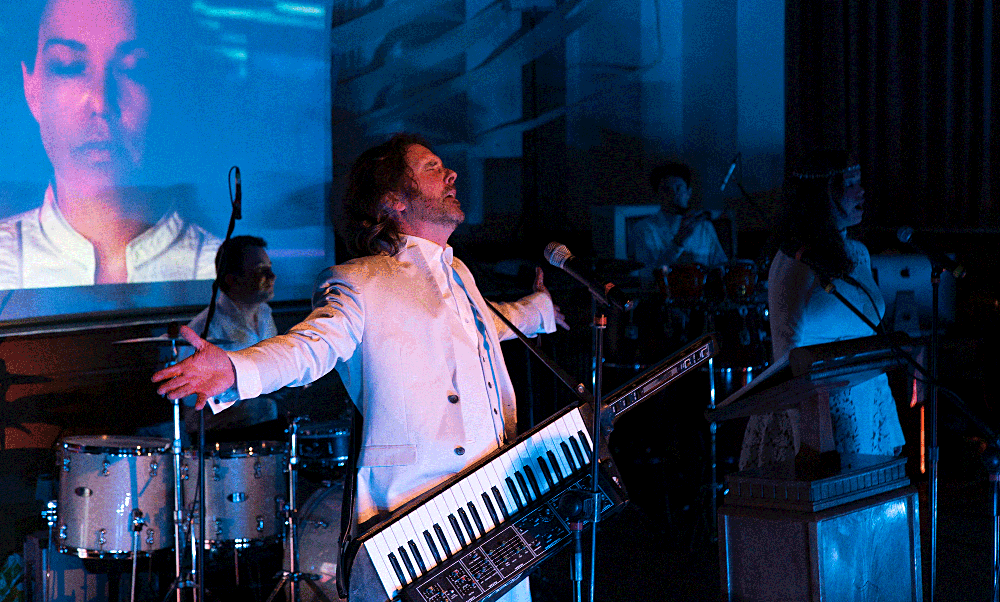 Dive into the issues with the podcast Unsee The Future >

Watch the complete souvenir cut of
Five Songs to help us Unsee The Future
by Momo:tempo