Save the date, February 22nd. The new single from Momo:tempo is released, promoting a new series of creative interviews and accompanying book series – all to help anyone “think like an artist and change the world” in an era of crisis. 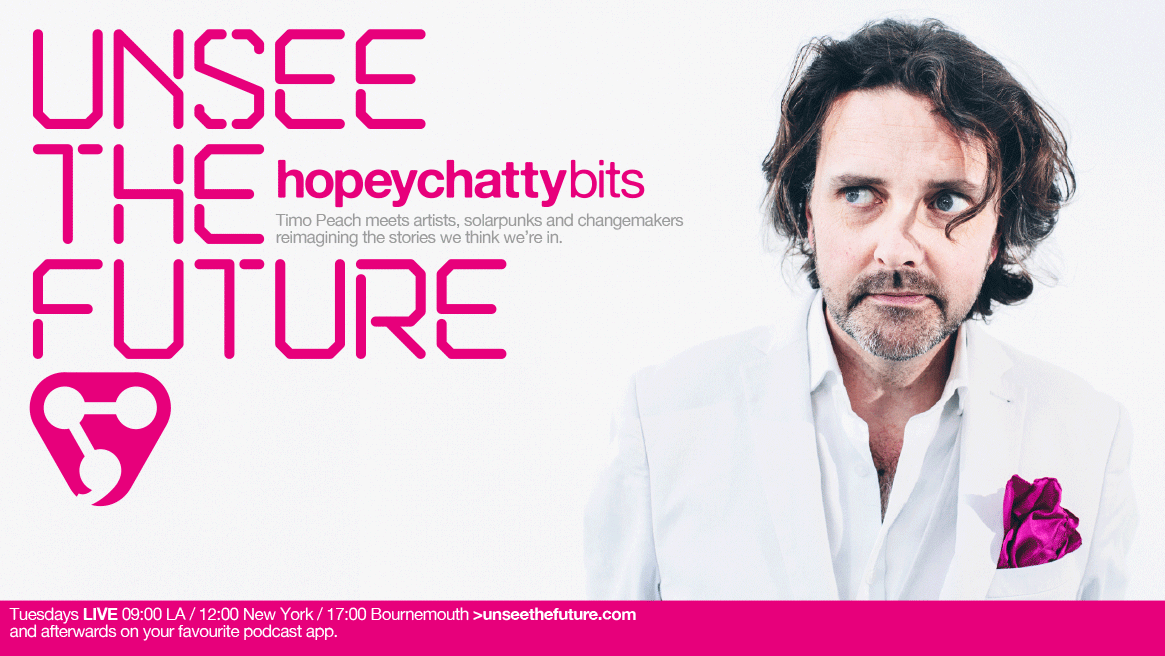 How Big is the audacious big beat new tune from Bournemouth music artist and social impact storyteller, Timo Peach – but it’s no coincidence that the B-side to this new release is a new mix of the signature tune to his idosyncratic research cast. For, after 31 foundational episodes of Unsee The Future, exploring “how to encourage the more hopeful human tomorrow” the single is a flag for its new spin-off interview series: UTF: The Hopeychattybits.

“Regular listeners to Unsee will have heard bits of Timey Blimey a lot,” says Timo of the show’s theme, “but up until now they’ll have only heard my voice on the episodes – the Hopeychattybits is about to change this.”

Being Momo, the new music release is not just releasing new music.

“Meeting artists, solarpunks and changemakers”, the new podcast is an interview series designed to show how some creatives are already “challenging the stories we think we’re in”. A theme so central to Momo’s work, it’s the title of the first book from his findings – which he is also sharing an essay chapter of each week to his mailing list, starting on the 22nd.

SAVE THE UTF LIVE LINK >

A guidebook to redrawing the future.

UTF: How to think like an artist and change the world is “the non-art student’s guide to what the hell art is for in an era of crisis” and explores nine practices of art that can help ordinary readers see the world around them differently. An idea vital to times that seem locked on a course to planetary destruction, thinks Timo.

“The book is a kind of codification of what researching Unsee‘s core episodes showed me – that art is what we most need, in a sense, to the change the world. Because it’s how humans change the way we see the world, including potentially the cultures that lead us down this catastrophic path” he says.

Like co-hosting The Global Goals Music Roadshow with AY Young – which is also returning next week, to EarthX TV – writing the book is as much about connecting people to other creatives, makers and ideas as anything he is making.

“It can also act as a kind of handbook to the work of some remarkable people, trying to re-imagine the future from the boring dystopias we are constantly told are inevitable. People I am lining up to talk to from the world of solarpunk and futurism in the first new UTF podcast series. I can’t wait to share their stories.”

Music to shake out the stories we think we’re in.

It all reflects the idea of finding courage to look forward with vision, in an era of crisis that a globalised 21st century society seems to have lost the capacity to do in the everyday, as Timo explored in his Christmas live talk: Is Generation X about to discover what its name stands for? And all of this stemmed from an original project that was itself, art.

The lead single, How Big, is taken from the long-in-development The Shape of Things To Hum and, like every piece on the LP that started Momo’s exploration of the future, explores a theme of science fiction – in this case, “the galactic megalomaniac”. It’s video reflects a certain power-crazed madness, but looks more like global figures closer to home than Ming The Merciless.

“I was planning to release it during Davos week,” smirks Timo, “which tells you something. But Davos was postponed until the summer. Which is disappointing for hoping to get this projected on a blimp over the Swiss alps.”

“Scifi has been teaching us the future for generations,” he adds, “but our generation is due to find the courage to write whole new stories of us. Futures we actually want to live in. This will take the courage of artists to bring alive, but solarpunk is the genre to manage this.”

How Big is out February 22nd 2022 on all digital platforms and Momo:tempo’s Bandcamp >

Unsee The Future: The Hopeychattybits EP01 debuts live the same day on Momo’s YouTube channel and later on your favourite podcast app.

UTF: How to think like an artist and change the world begins weekly from the same day for subscribers to the Momo:memos >