It’s been a bit of a journey, man.

After a wrestling with a pitch, around the very helpfully well structured framework laid out by TEDx Southampton 2020, back in the late spring I hit send on a rather thorough package of creative intent to join their event. To ask for a corner of their hallowed stage. The stage that was to have that famous giant Helvetica Heavy logo standing on it, just down the road from where I live.

I upped my game for this one. This felt good. I’d felt oddly moved by a sudden new take on my essentially Unsee The Future core thinking that seemed to fall out of my conversations with Caroline about what irresistable idea worth sharing I should try riding into the Mayflower Theatre upon. A new way into the big picture of our human planet in 2020. Dignified and rehearsed. Informed and sedately intelligent. Just a hint of boyish Momo cheek.

Or possibly me riding the TED logo like a bronco in a tequila bar. You get the picture.

After thirty rich episodes of my research cast to date, I feel like the water is getting deeper and hotter. Not in the sea off Bournemouth, you understand. My exceptionally late dive into summer sea swimming this week may be based upon eight days of very benign weather, but the English channel is still a bracingly healthy temperature. Y’know. Healthy to the corpuscles and the zealous wellness guru in you, if not to male body confidence. Though call out my daily commitment to the plunge as soon as there’s as much as a force three off the Purbecks, won’t you.

No, I obviously mean the general temperature and complexity of current life on the human planet. My grip on encouraging the more hopeful human tomorrow is slightly more tremulous. Experience wizard mate Karla Morales-Lee very generously but forlornly tweeted me some months ago saying: “I feel like there should be a Timo podcast telling us everything is going to be alright.”

And this gave me quite a personal way into a potential TEDx talk.

When I got back a standard email two weeks later that I hadn’t been selected for audition, I felt slugged in the solar plexus.

I was genuinely surprised. And not because of the middle aged white bloke over-confidence you assume I carry everywhere, on account of how much I appear to assume people want to hear what I reckon. Depsite the analytics. No, I tend to assume first that my default productions will struggle like hell to seem ‘credible’. And no wonder, I know, you’re right. But this talk felt like it should have landed.

So I did something uncharacteristic. I pushed back.

I politely emailed Annelies James from the team, working with Lee Peck Media and the Mayflower crew and other partners all bringing this show to life and slaving over emails with people like me. And essentially I thanked her for taking the time to go through mine and everyone’s talks, and acknowledged it can’t be easy telling people No. But also why did she tell me No?

Annelies was, as she has been throughout my contact with TEDx Southampton mostly through her, lovely. Encouraging but professionally consistent. And I got the crumbs I’d needed – I’d apparently been very close to selection. But I think I’d been late in the day and others had fitted into the event’s more intimate theme they were curating, human to human contact, just that bit better.

So, I rolled with the punch and breathed in. As Savannah Peterson said on Twitter today, admitting to failing at a big tilt at something: “It feels so 2020.” God, but this did. A year of needing personal resilience in grinding and sudden fighty ways. But something told me to take the lesson on fighting. Namely: Make sure you do, don’t take no for the whole answer, but do it with empathy.

Two weeks later I emailed Annelies again. Wondering if anything had, ah, changed.

To her charming credit she called me. I don’t think she’d mind me sharing that she said: “You’ve been so nice about it, I’m thinking: f**ck it, let’s hear you.”

I had an audition.

Writing and praciticing the whole first half of my talk I marched onto the Mayflower’s wide boards into the lights in a top hat a month later, and suddenly realised I was doing my first ever audition. For a bloke with theatre supposedly in his blood, I’d never actually put it out there quite like this. Like every actor has to constantly to find every single bit of work.

“Bugger me, I’m on a talent show” I realised as I stood looking at the judges. They all smiled at me warmly, with the magnificent sweep of the Mayflower’s oppulent auditorium atmospherically behind them.

Sauntering out after warm applause, I figured: “You got a shot and gave it your best. Now don’t think about it.”

So I tried not to think about it. Think about how perfect me in a top hat on a grand Victorian stage opening a talk with the words “The VicTORIANS!”in a music hall swoop would be for this show. Or about how much I could do with an honest-to-God break. A little bit of good luck to boost the energies at last and have an actual THING on my CV at last. Tried not to think about how utterly timely and Right Ruddy Now relevant my talk is.

Tried not to. Failed, obviously.

Then I heard. The judges were finding it hard to select twelve. I was down to the last 16.

I cheered. Then thought… why not just put us all on?

I of course cheekily, and ever so nicely, asked Annelies why they couldn’t just put us all on. She ever so professionally left giving me an answer until she had a firm one.

A week later I finally heard. And you won’t be surprised to hear, of course, that I… didn’t get selected.

I felt hit in the solar plexus.

Except… I had been selected. I was… an alternate speaker.

Number 13 of 12, essentially. Yeah. THAT close. Along with a spare female speaker, Johanna.

The bucking TED logo threw me off. Face first onto my stupid stupid top hat.

Now, you might imagine how this feels. Or you might not. To think that in the middle of a summer of economic ruin, global pandemic fear, loss and conspiracy, I felt all but knocked out by not winning a TED talk tells you all you need to know about my first world problems and sense of perspective. Obviously. Except, y’know. You have to put your all into an audition, or not even bother turning up. Right? And if my one use in life in these horror-ful, utterly destabilising times is to bring strangely confident words of encouragement to people occasionally, then of course I was feeling hit in the boney plate covering my heart at coming so close to feeling useful. To doing something that might have reached more people with something creatively actually POSTIVE in 2020.

I’m just a twerp. But such is the detail a storyteller of any kind has to inhabit. All theatre is silly. And from the depths. And just hard work. And what one must absolutely do or die trying.

I had another call with Annelies. In which she was as kind and thoughtful as she could be within sure professional commitmenst to the team – 100% correctly – and in which I tried and failed to keep all my adult dignity and a suave indifference to the spotlight. The challenge was set: I was being asked to be a sub, if anyone dropped out. But the point slowly dawning on me through the punchdrunkness was… I was being recognised and promoted as a TEDx speaker. PEACH. WAKE UP.

Having given it my all, prepared to say: “I don’t want to put myself through that” and walk away with head up and no hard feelings at all, I saw myself under the TED logo on the new website and my knees buckled. I sat myself down and realised I had been selected as a credible potential voice of the event. And this was still a chance to represent and cheer on South Central. An opportunity to be in amongst the conversation for a while, and make the points I think are important. And to be part of a really well put together TEDx event on my doorstep and learn from it and get to put this mugshot in my blog posts: “I’m a TEDx speaker”. 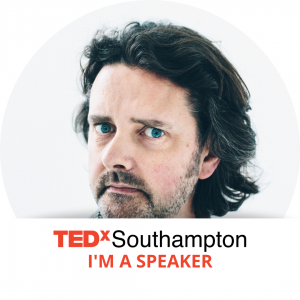 There’s also another bit of the story. M’dear mate Matt. Because, while I knew almost no one, surprisingly, who made it through to the finals, one of the most distinctive voices for the Bournemouth and South Central creative scene, Matt Desmier and I got to ride into it a bit like another job, swapping notes about which of us had done less homework closer to the hour. It was encouraging, and a laugh. And we came THAT close to both riding into it together. And hey, right the way up to the final day, we actually are.

But there’s only so much of a good thing a single event can take, which I think they recognise… so I’m happy to say he’s now representing our corner of the coast in there for us both over the last mile. His talk, The future’s not so different, is a ride through science fiction culture deconstructing our so called predictions a bit – so it’s obviously the talk I secretly most want to watch. Plus, he’ll likely now give me a slot when he brings back Silicon Beach, so, y’know. Mates. I appreciate them. And am proud of them.

So I AM a TEDx speaker. And I will be sharing at least a version of my talk once the event has happened in November. Between now and then, I get to speak about the issue and the theme explored by our other twelve, no thirteen, speakers – we’re both taking this one for the team, Johanna. Picturing how your work honestly fits into a team? This is definitely part of what it means to make human to human contact.

Especially given how much I wang on about how the story of human planet futures “is not about me.” Called out there when it most counts, huh, Peach.

Also, Annelies said I should start a government petition to get me included, so there’s that. 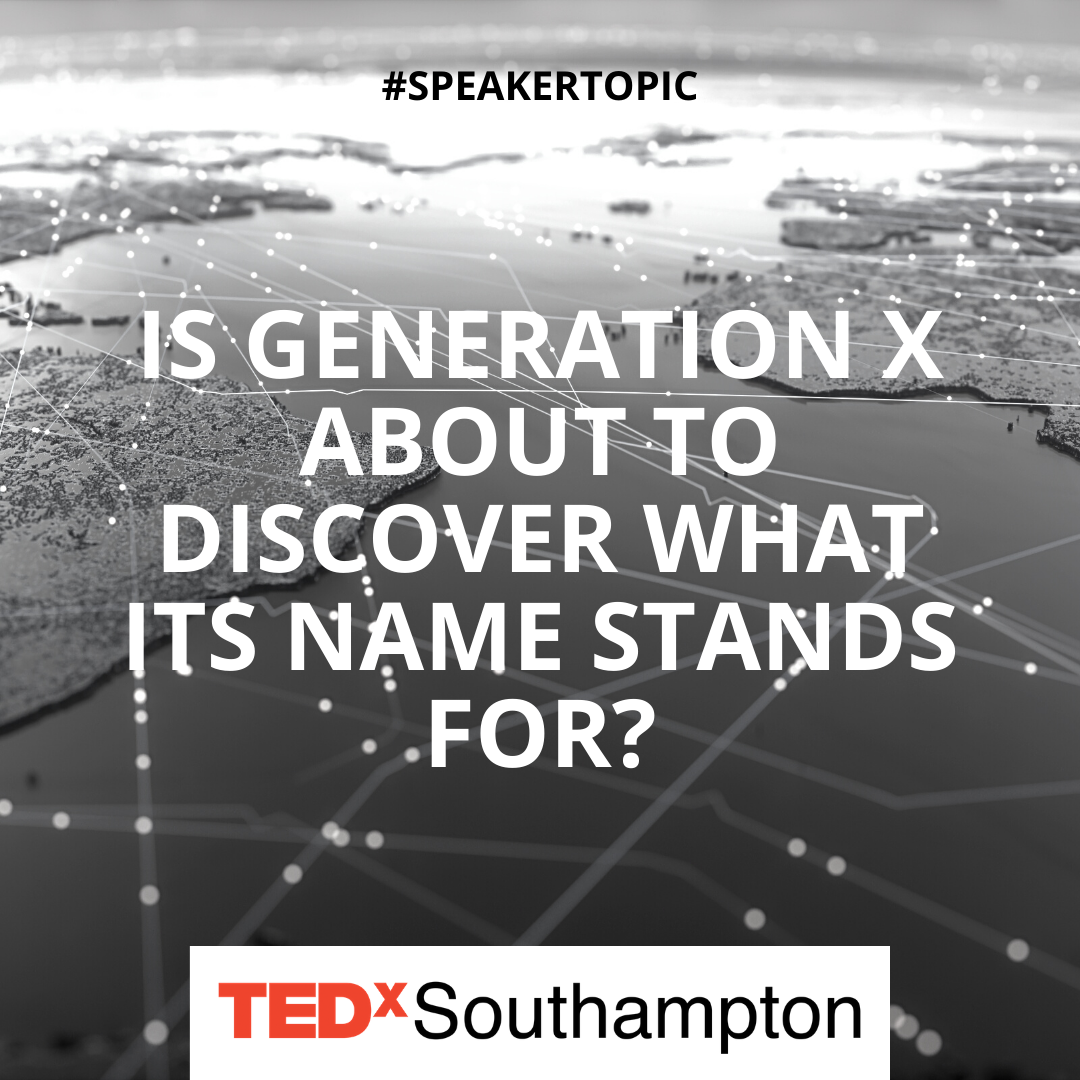 Momotempo · Unsee The Future: Think Blinks – A generation being called to wake up, but to what?