Do you think we’ve given up “trying to make sense of all this?”

As a creative interested in sense-making, I think we mainly just want to have a break from the uncertainty. And the ruddy gnawing belief we should be hustling more than ever. But this stuff is big, and if most of us seem to be weary in our efforts, even if we’re not on a care-giving front line, it’s surely because the background emotional processing of this is a constant drain.

It’s my feeling that this shared experience is, if it’s doing anything, essentially highlighting the problems, trends and emotional pressures we were wading through anyway – it’s not only art that can give us dramatic new ways of seeing, perhaps just when we needed them. But what will help us process all this uncontrollable processing?

The second part of Unsee The Future‘s look at the subject of Experience is very Unsee The Future indeed, looking at the context we’re still in as we consider our immediate future, and taking us from a thorny wrestle with a big tech issue filling some bandwidth between us recently to a look at how we might REALLY have to make sense of ourselves in such numbing times. But it’s come out on a weekend that’s gotten me thinking. Thinking about the best blog post I ever wrote and why.

Exactly ten years ago, I performed my first gig with the Momo:tempo Electro Pops Orchestra.

And I barely made it into the room. Thanks to another global natural event.

Enjoy for the first time here, my impeccably professional, note-perfect opening performance at Momo’s first ever live outing, about ten minutes after landing in the venue with my bags after a 50-hour adventure:

As you might imagine, publically coming out with a new band, after sweating away at a new sound for a new music project, was a bit of a big deal for me. Rather a lot of nervous energy had gone into trying to make it work, after a delightful invitation from dear chum Sebastian Michael to disrupt his elegant book launch cabaret for the rather wonderful novel Angel at the Troubadour in Kensington had bumped me into having an actual go. After meeting trombonist Pat Hayes and saxophonist Dave Ruff through trumpet maestro and mate John Herbison on a few sessions for The Golden Age of Exploration, I worked out how to get the three of them plus long time musical co-adventurer Mark Adkins onto the Troob’s tiny but hallowed basement theatre stage. Then John said he couldn’t make it but not to worry, for another young star, Tom Walsh, would step in at the last moment and perhaps I might have to shake his hand on stage to meet him or something but it would be fine. Don’t worry.

So I went on holiday for a week just before, with all plans set, to help with the not worrying.

Four days after landing in Majorca, a volcano errupted in Iceland.

Eyjafjallajökull’s ashcloud was the first time I’d personally been caught up in a mass redirecting and ultimately grounding of airline flights. And it might have only been just a bit of a jolly wheeze for the lovely first lady of Momo and I, had I not had the small matter of my musical coming out looming the following Monday. Was it possible to make it back, with flights dropping off the departure boards all over Europe? How do we make sense of such uncontrollable disruption to our plans?

The story of how we did indeed just make it did indeed lead to my favourite ever personal blog post. Which includes the complete tweet thread which people began to follow with interest – including Sebastian himself, bringing his audience up to speed on my wherabouts as the show began without me.

Thinking of the adventure it took to tumble through the door with my suitcase and roll up to the foot of the stage to surprising rapturous applause is a fond memory, perhaps in line with the adventurous imagery of The Golden Age LP itself and indeed of my whole creative approach to music. But it also brought me up short remembering it. Because when will we next all be sharing the intimacy and immediate energy of a live experience? 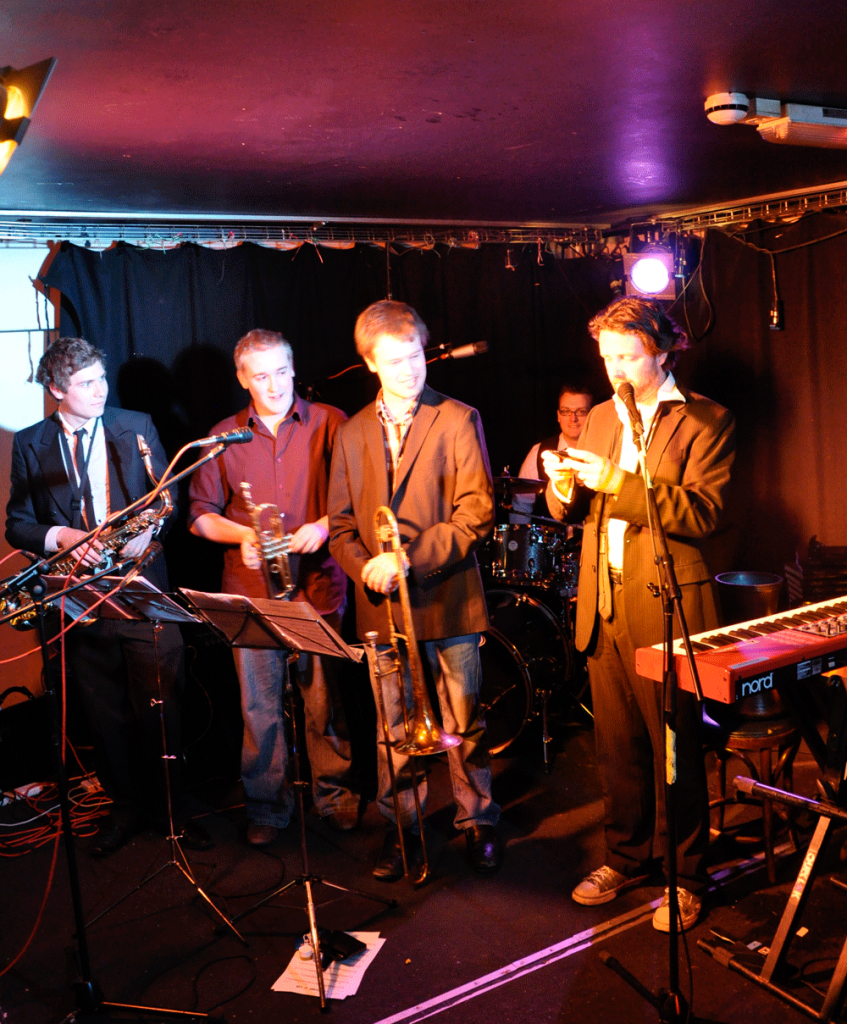 There have been some rash things said since lockdown started a month ago here. About how life will not go back to normal and live experiences are history. I disagree. Life won’t ever be quite the same normal again, but I think we will be craving visceral experiences feeling the air being pushed through us together, sharing the vibe of something that only a true live audience can share. The question really is, when we feel the opportunity and courage to make shows again, what shows will we make, and what shows will we want?

I had to strain every bit of wit, patience and help-asking to kind of miraculously just make it into the room that night. It means the experience we all shared was special in unexpected ways, and it was a public arrival for Momo that told me two unsurprising things: Successful live performances will always be the most encouraging and energising experiences of my life, and they will always take a disproportionately stupid great effort involving begging and ruthless disdain for anxiety.

This show was delightful and intimate and perhaps couldn’t have been a more appropriate start for Momo, given the cabaret storytelling of some of its sound. Pompous and epic as I always want that sound to be, and as much as I adore the captured musical moment in recordings and production, that snap of energy in a room full of people with their hearts high is a land waiting to be reached again, by any means we safely can.

It’s been my privilege to play with these gents and still call them my friends. They’ve enhanced my shows and recordings and musical knowledge since John first so wonderfully introduced us over a decade ago, along with so many other great talents they’ve brought along for the ride. And if my plans come to anything, there will be some amazing new adventures to share when we’re all ready for it. If we can make sense of what we really need after all our plans have been so disrupted. x

And relive two cuts of the proper little set we shared after wards, the first ever performances of Paris Breakfast and Al Hamdu Li Lah: