When Marcus Brown began performing his piece, The Passing, a couple of years ago, the gift of it to its audiences was a surprise – a big context twist. Known for his presentations and talks as a tech and digital culture speaker, his audiences were conference people – advertising and web conference people. Attending those conferences to learn some new ideas, hear some leading edge creative technology thinking, perhaps – but not expecting… art. So when he took this particular season of talks from PowerPoint slides to choking and dying on stage, Brown’s reputation spread. Now he refers to his performance work as conference hacking.

Today, The Passing has grown to three distinct episodes in the story – not presentations – and the last part, Flex, has taken the whole format to another theatrical level. Including adding a specially commissioned score, as composer and creative Timo Peach explains.

Hear a cut of the theme from Flex by Momo:tempo:

“The first time I met Marcus was at Silicon Beach – Matt Desmier‘s ideas conference in my home town, Bournemouth. The year before, he’d spoken also and it had been thought-provoking, wry, almost techno-poetic philosophy. But half way through the first ever performance of The Passing, it sunk in properly what he was doing this time – performing in character. And it was just genius!” Timo grins. “I was on my feet cheering with rambunctious enthusiasm at the end, which was the finale of the conference’s first day – what a closing keynote. I approached him the next morning and essentially fanboyed at him.

“For some reason, he kept talking to me over time and eventually approached me with a terrific proposal – music for the trilogy’s highpoint finish.”

The three pieces in the series are chilling, near-future critiques of technocratic business culture.

“Friends have asked me to stop writing these things,” Marcus says, “they think they’re too predictive of the real world.”

“The Passing Trilogy revolves around one simple idea: what would happen if a corporation rebuilds the world in its own image? A society based on it’s corporate and marketing values. A world that feeds off of our fears and egos.” 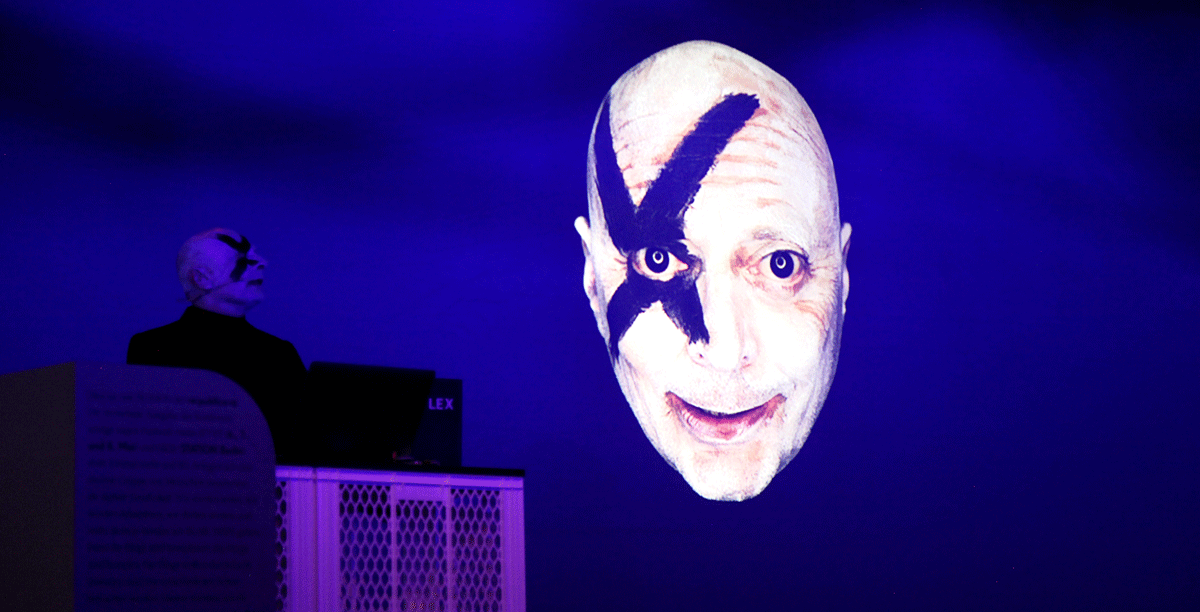 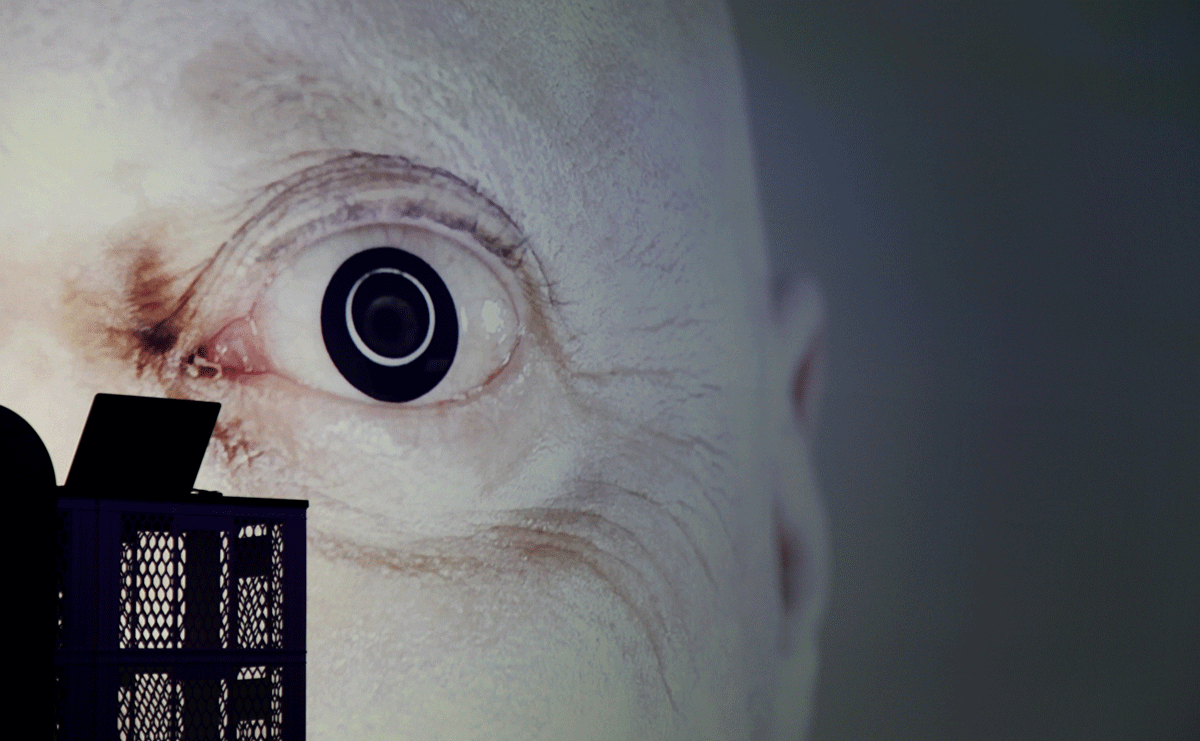 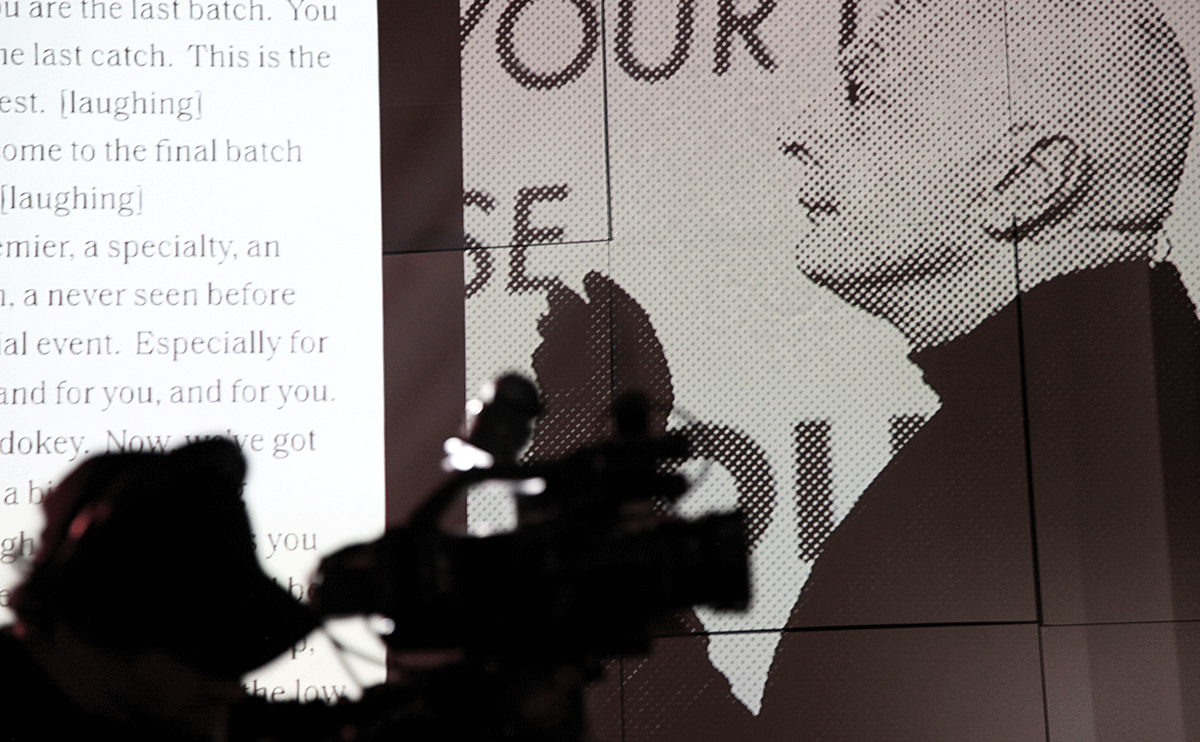 “Be the hustlepreneur you were always meant to be.”

Flex is another one-man structure and it’s as dense in content as the other chapters.

“The first part of the Trilogy, The Passing, is the end of the story — we see the completed version of a world “made great again” as Marcus explains. “In the second part of the Trilogy, The Sensorium Process, we go right back to the start of the story and witness the strategy kick-off, a corporate all-hands, where the new talent strategy “From Human to Resource” is presented to 300.000 employees by the Director of Human resources, a man called Tyler Xavier. The challenge with the third and final part, which chronologically sits in the middle of the three, was to show how we get from the mundane evilness of the Coalition Strategy Day 2020 to The Passing grounds of 2059.”

Across almost an hour on stage in the debut performance, Brown struted, preached, cackled and scorned back and forth across Re:publica’s huge backdropping stage screen, through a sequence of heavily branded, richly detailed typographic and video content, fleshing out the ironic but close-to-the-bone absurdism of an influencer future turned up just a notch or two to 11. All still as a director of human resources essentially giving a corporate conference talk.

The protagonist in Flex is Tyler Xavier, and his personality was the key to setting the performance’s tone – in graphics and in music.

This had one singled-minded tonal implication for the score, as the bloke from Momo recalls.

“Marcus briefed me in Franky Goes To Hollywood 12″ titles” he says flatly. “Marcus asked me if I got it. I said I totally got it.” 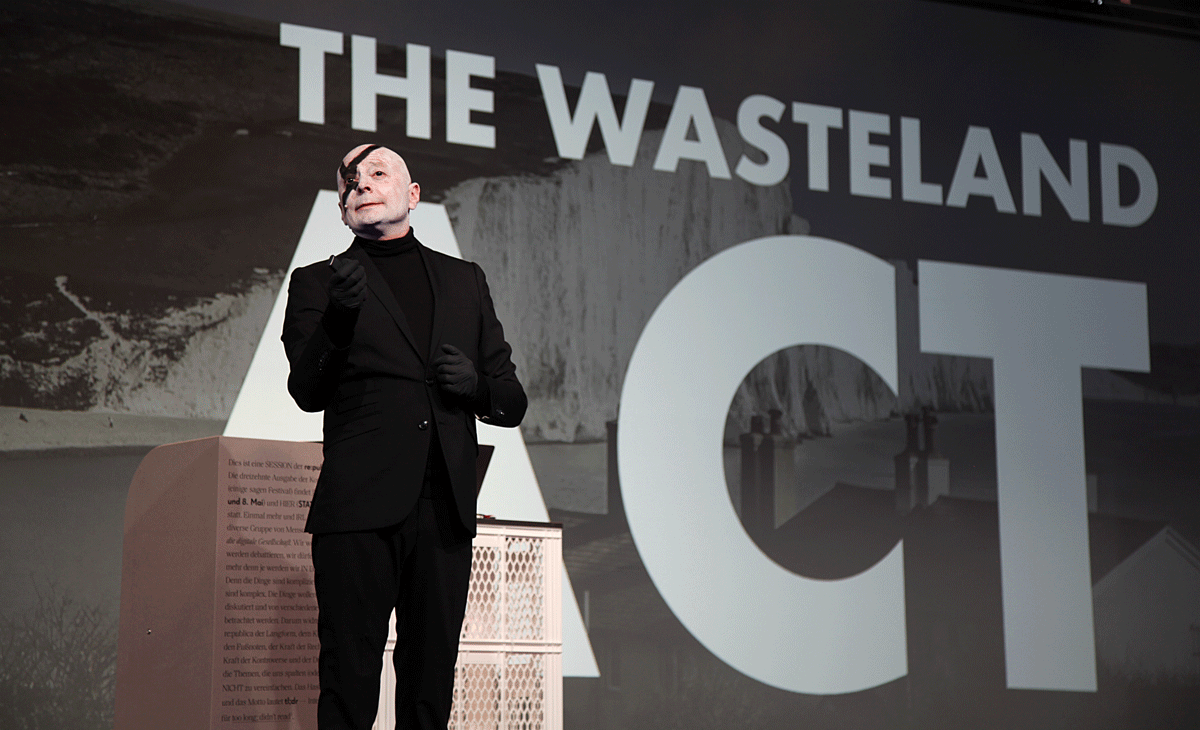 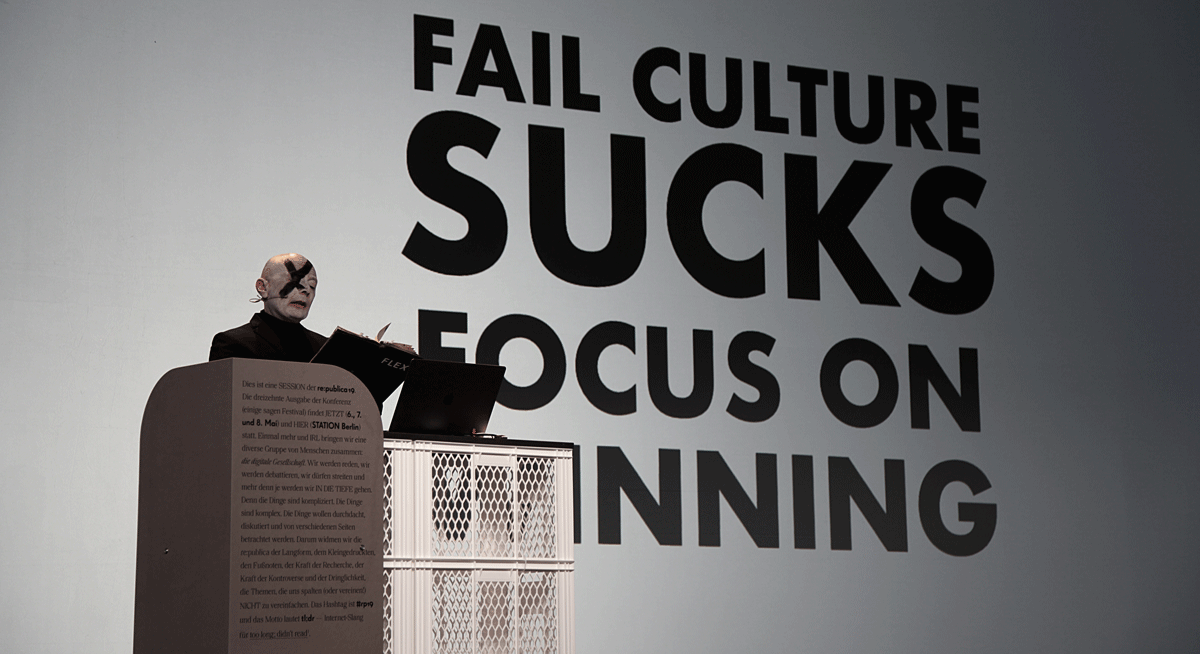 “Influencers never stop, even when they…”

The music score was the first time Brown had collaborated with a composer so directly, especially in the world of The Passing. So Mr Peach was conscious of being invited in to a space so efficiently personal.

“Marcus is a multi-talent. These pieces are something really only his combination of experience, outlook and capability could hope to pull off” he says. “The primary thing is the thinking behind it – it’s horribly impressive, in concept and articulation. Very clever subversion of the lexicon of techbro marketing that tickles the mind beautifully, but filtered through the visual language of a real art school designer into a complex satirical work of science fiction. Words, pictures, story and thinking to challenge reality, by simply tweaking it the tiniest mirror universe degree. Barely a whole degree.

“Then he gets up on stage all alone with nothing but a slidedeck on a laptop and performs it like a bloke with a street theatre background. Which he also has” nods Timo. “This time painted up for the full digital cabaret. All that was missing was the massive ZTT-style synth score – which I gingerly set about working up, trying not to muck it up with sheer excitement.”

Mr Peach felt this called for some core sounds from the era directly.

“That kick drum. I never thought it would suddenly sound so good” he raises an eyebrow. “The Linn Drum kick that’s not very good with bass response – I just knew Marcus would recognise it and delight. And even more so, the legendary orchestra strike. ..You know the one.”

“Timo sent me his first demo response after a couple of weeks and I pressed play on the file” says Brown. “It immediately did that orchestra strike loudly. I pressed stop and said: “He’s got it.”” 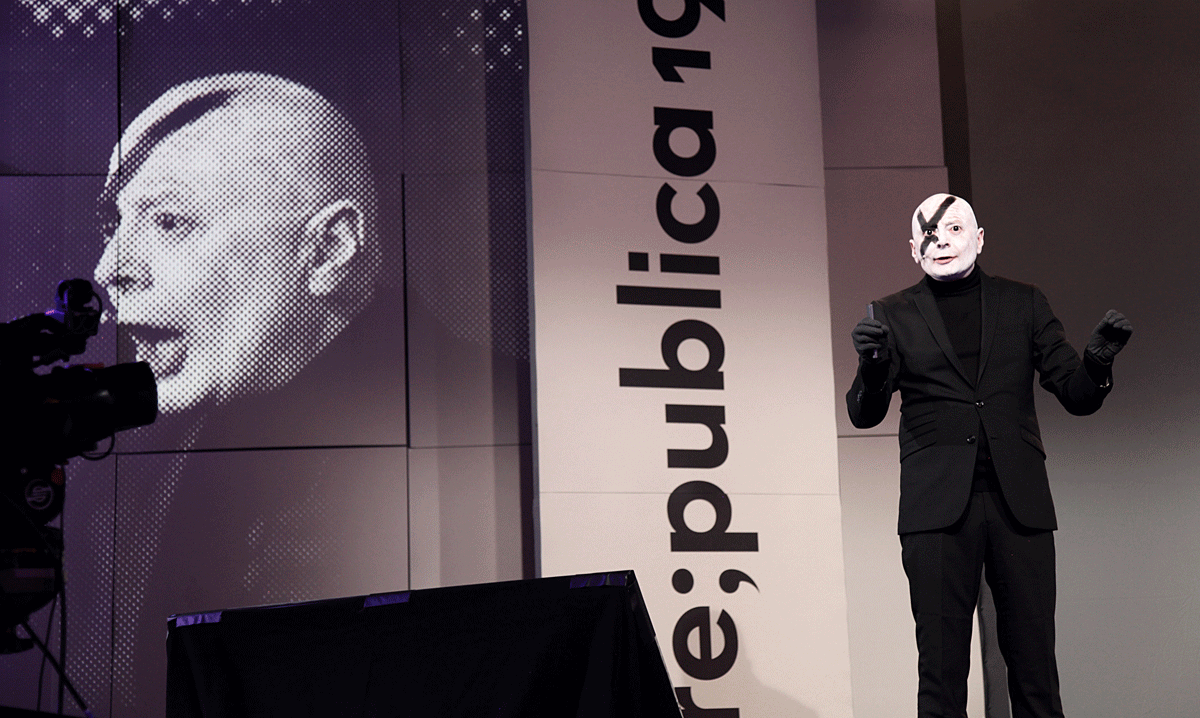 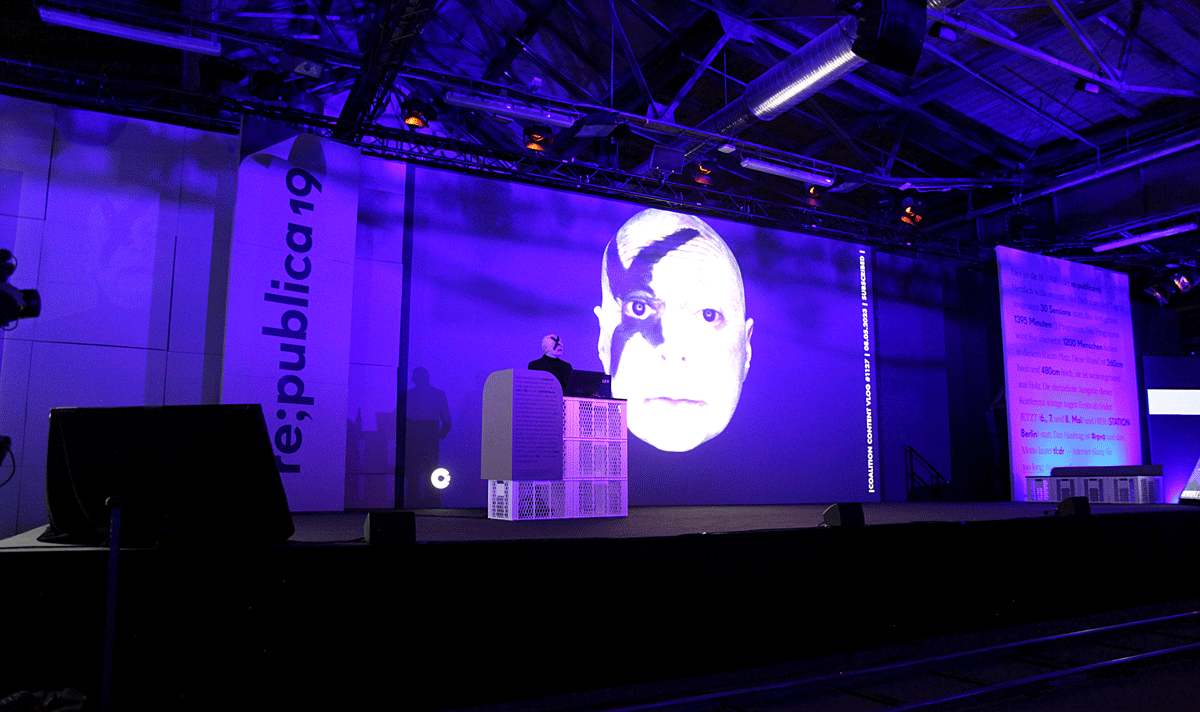 “Do not be alarmed.”

Writing in 1980s mode is a natural fit for Momo:tempo, as it’s chief character started making music then. Which is what worried him.

“I felt in my own flow doing this score,” Timo says. “It’s second nature to build textures in this synth-minded way. It does now sound very of an era, of course, but being a native to it I could essentially channel the spirit of it without being slavish to every sound source – it could evolve into some more contemporary sound design around the Emulator II samples and drum machine-gunning cowbell. Clear little tunes, arpeggiated tonal rhythms and big pads, augmented with some bombastic 80s guitar from Momo’s head of guitar department, Martin Rice. I had a ball. Terrified I’d turn out something unbelievably naff.”

In the end, Marcus felt encouraged by the collaboration.

“It was a remarkable experience working with Timo, and I think we both agree that, in terms of FLEX music, this is just the beginning” he said.

And on the night, as Re:publica’s main evening keynote in Station Berlin, Momo:tempo’s score did seem to strike the right note, worked subtly into the bold canvas of Marcus Brown’s whole barnstorming theatre performance, bringing the audience to its feet for what may have been an unprecidented standing ovation at the end.

“It was bonkers and brilliant and disruptive and daring,” says Timo. “And it was an honour to tinker around the edges and creatively encourage this absurdly impressive bit of work, in a small but responsible way. How could I not have gone out there to watch for myself. Re:publica is Marcus’ favourite conference, rooted in a sense of digital creativity and society as it is, and still he punked  its socks off. I can’t wait to go the full Lion King one day, as he put it. But for a first ever production, this was something next level. And I think I learned much just working with him and spending time with him. He’s become an invaluable mate to Momo. I can see why he is a mentor to many youngers in the creative community.” 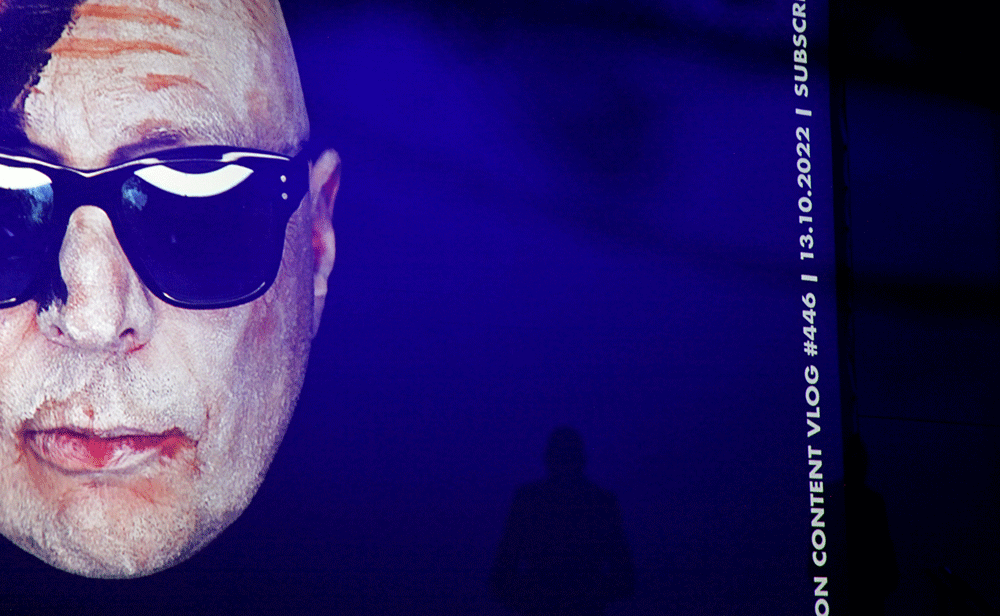 Listen to a playlist of cues – The stations of Flex by Momo:tempo on Soundcloud >

One thought on “FLEX: Momo brings some blistering power synth to Berlin supporting a breakout bit of futurism theatre.”