Long after doing the rounds of film fests and guest screenings, Bristles is getting comfortable with itself, and Momo can share its involvement in the story of how Lilly and Lisle found their groove. A subtly hyper-real world set in a traditional seeming boarding house in the swooning English countryside, Danielle Arden’s short film follows a young couple on their honeymoon, trying to find the right words… and moves.

South coast composer and creative Timo Peach approached the score with an immediate style in mind for such an ambiguous period romp. 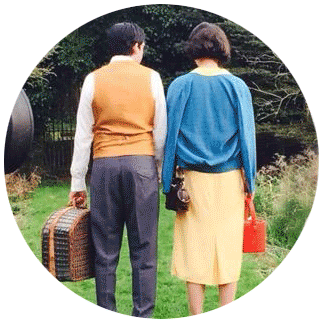 “It had to be some undercurrent of electro-swing” he says. “The obvious placing of these characters musically was to create a pallette of buttoned-up strings – a genteel chamber orchestra. Very sensible tempos and flat rythmn to the surface of their marriage. But what you want to do to that is subvert it with beats at some point” he grins.

The fact that Grant Leat’s Lisle is a little intimidated by Noor Lawson’s Lilly, as she confesses she is not altogether virginal on their wedding night, only serves to show the other side of this meeting of worlds – the blinkers of a ‘classic chap’ rather too caught up in his own insecurities to see his new bride’s own vulnerabilities. It takes confidence to be a giver, after all. And the music had to allude to the possibilities between them.

“It’s a nice sound they have together,” says Timo, “but it’s a pretence at the beginning. Their little theme is just too nice. But when they open up their vulnerabilities to each other, they can let the beats and the bass in. It’s not simply jazz they allow in, but the club dance floor. A nice natural mash up of the characters and their mashed-up world. Seemed a great fit for Momo.”

In the vein of such mashing up, however, there is another moment of style wonk that gave Momo a great excuse for another big love of Mr Peach’s. The sound of the 1980s.

“This was my outstanding memory of working with Danielle, apart from how positive, clear and still open she was – and I’m obviously hoping it’s her’s too. She asked for a full 80s ballad for a scene where Lilly escapes to the cinema for a matinee howl on her own. And we decided to weave in a raft of horrible knife-twisting lyrics for the poor character as she hears the song presumably throughout the film she’s watching, in unsurprising floods of tears. So Danielle penned words around the script and I turned them into the most 1980s-gosh-darned melody and sound I could.” he explains.

“Then one day, I called her on Skype. And when she answered I simply held up my finger to the camera with a shush and said: “No, don’t speak. Let us have only this moment.”  And I rolled my chair back to the piano and sang the whole ballad Fight for the future of our love as meladramatically as I could, almost mustering tears at the end. Then just rang off.

“Making film is fun,” he adds.

Supported by Realstrings’ Pete Whitfield, with Simon Lockyer on cello, and sampling one or two horn sessions from past electro-pops orchestra recordings, Momo’s sound for this plays squarely into playing at home for him – playful, lyrical, hinting at groove and with one eyebrow somehow firmly raised throughout the score, with moments of touching connection.

“It’s cabaret, really” says Mr Peach. “That slightly over-posterised tone that tells a story in contrasts. Almost cartoony, but somehow right for this. Well, that’s my bag isn’t it?”

Shot and completed in 2015, the film’s composer adds that it’s nice to revisit these characters after so many years.

“I know Danielle and her team Kickstartered this on a shoestring, but there’s something genuinely touching about these two as they find each other again. This to me feels almost like a charming proof of concept to do something more with them together. Bless Lilly and Lisle, eh? Who knows if their marriage would ever work? I think the interest might be in discovering it did.”