As south coast arts hub Lighthouse Poole reopened after a refit, it asked Associate Artist Hazel Evans to produce a little installation to celebrate, at the end of November – and she chose to create a pocket experience of a key part of her musical project with Momo, Adventures Into The Monochronium.

The finale to the musical spin-off of Hazel Evans’ 2012 exhibition was a piece that wordlessly evoked some mysterious, melifluous climax to an uncertain narrative about the black and white world of the Monochronium – The Observationarium, written by Timo from Momo:tempo. But, as different aspects of the implied story have since been explored further – such as Hazel’s 2014 installation at the Shelley Theatre, The Ink Mountains – the real goings on in this rich fantasy world seem to keep wanting to come out and become clearer. At least, this is what Mr Peach has observed in his work with Hazel in the years since they completed the original project together.

“It always felt like a beginning of an adventure, not a completion” he says. “It certainly felt like the beginning of a recurring partnership, and rather proved to be so,” he adds, “but Adventures itself… I just knew Hazel would come back to it. And The Observationarium installation is just one of the ways we’ll be peeking deeper into the magical mysteries of this abounding inner landscape of hers.” 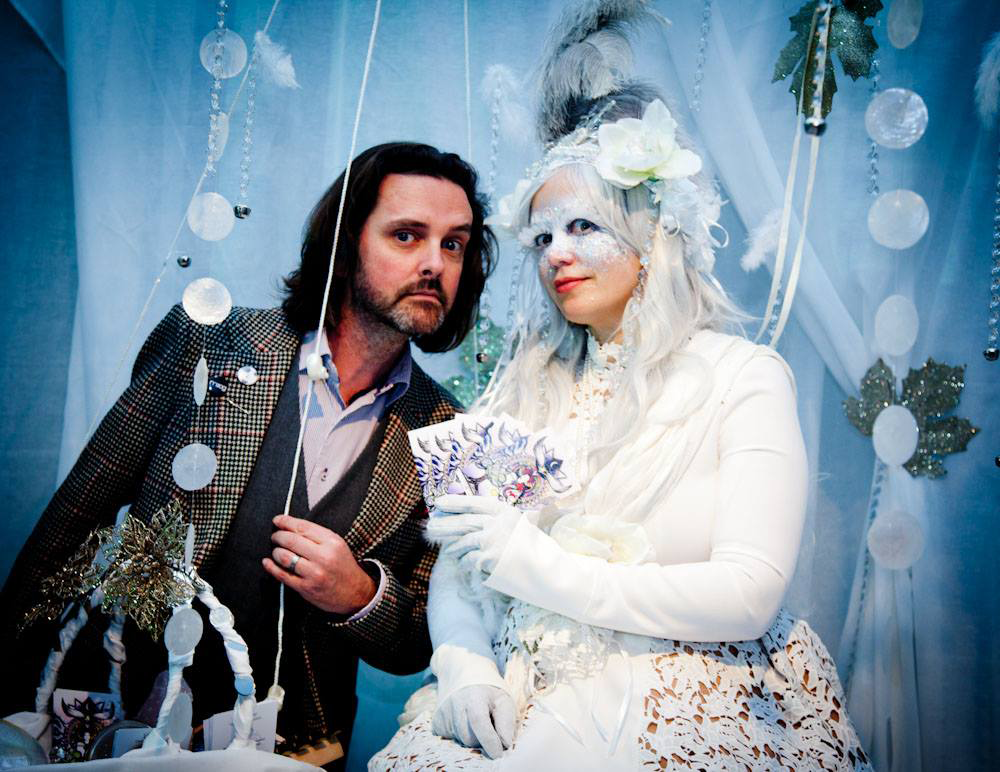 With so many projects and workshops explored in her work as a performance illustrator, Hazel Evans can be comfortably referred to as colourful. Her own creative journey could be described even more overtly like a pilgrimage than many contemporary artists who might use the word, employing words and verse around marks and illustrations and use of her own physicality and character to develop recurring themes of exploration and progression and a certain searching in her storytelling. So it’s obvious that in its self conscious restriction to black and white tones Adventures Into The Monochronium is saying something. The banishing of explosive pigments from its every character and scene is unlikely to be through creative timidity. But what drives her back to it – and why illustrate the final chapter of it in a new installation?

“I am in constant relationship with this beautiful dance of life between inner and outer worlds” Hazel says, “and Adventures is a very personal inner landscape to explore. It has led me as much as I have led it.”

But where that landscape has been hinted at, revealed in part, suggested, in the collaborative pieces Hazel has expressed it through so far, there is something more clarifying in development – a full musical with Momo.

“The story just kept coming back to me, and more and more of what I have been exploring instinctively through it seemed to suggest more and more detail. So Timo and I spent some time last summer scribbling on a big layout pad around the story, while I found the writing of a complete storybook really beginning to flow again.”

Mr Peach elaborates: “Every time Hazel read more sections of the details of the different chapters of Adventures to me and to our partners – both of whom are almost as familiar as we are with the original recordings – we all just said… wow. It’s so rich. It makes so much sense. And it just has to become a full musical. So this summer, we made a start on first sessions exploring a full narrative.”

The Observationarium, however, was a chance to go back to one of the pair’s favourite pieces from the project.

“If I’m honest,” says Timo, “it’s one of the pieces of music I’m most proud of. Inspired by such an evocative moment in Hazel’s remarkable story. Getting to explore this tonal world again a little, and to expand it out into an ambience, a sonic environment, was a little joy. The Observationarium is a magical, mythical structure in my mind, but I now know more of the pivotal events that take place within it, and of its back story. And I can tell you, it too is not a completion, but a beginning…”