If one of the secrets of good theatre – like good press spin – is generating anticipation, then keeping your fans waiting almost four decades to see you play live has to rank as one of the biggest stage build-ups in pop history. But if there’s one word that flamboyant duo Yello have left me with after such a long-awaited curtain-up, it isn’t drama. It’s humility.

The lovely first lady of Momo and I had said one word immediately, as soon as I’d somehow secured us the golden fleece of music show tickets from stabbing wildly at my keyboard on a ticket site earlier in the year – bonkers. Whatever Yello were going to do in that old power station in Berlin in October, we just wanted it to be bonkers.

“I want giant floating heads and fish on bicycles and a parading Holi colour explosion carnival of Dada looniness, please” I believe I said. Or similar.

What we got wasn’t that. For fanboys and girls at least, it was something more disarmingly affecting. 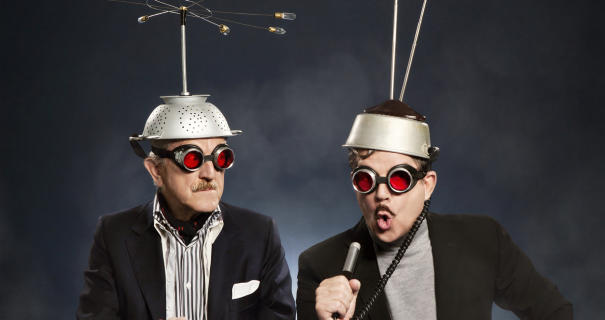 Something odd occurred to me while away this weekend. An awful lot of the music I spend most comforting time in is not trying to get me to deal with anything. There are no issues being wrangled with by the great synth heroes that first inspired me to attempt to make music myself. Most of them didn’t use words, for one thing, preferring a more universal language, you might say. Of atmos. Or maybe groove. And goodness knows, most club music is not euphoric because of it’s erudite social commentary. It is escape that is the issue – and of the first artists to inspire me, who have since found a more life-long relevance to my brain, none used words more evocatively and escapistly than Yello.

Dieter Meier’s unique vocals behave more like another silky human texture to Borris Blank’s divine rhythmns. Yet they are full of perfect little turns of phrase in English that augment each tone story the music already suggests. I found myself turning to spoken word in the make-up of Momo:tempo, from long before the project name existed, on an instinct unconciously encouraged by the sound of Yello. But Yello was never telling me how to change the world. It simply coaxed me out of the ordinary humdrum and into a more exotic aural landscape, far from politics and social breakdown.

The landscape of play.

It’s the homeland of therapy, perhaps. But I don’t think the boys of Yello set out with this in mind. Theirs is an instinctive demonstration of art – a life painting pictures, because it is what they were born to do. A subtle subversion, drawing on the heroes of daftness in counter culture, Dada.

For two artists whose work sidesteps deep heartache and politics, I can’t think of many people I’d be more interested to take to dinner than Borris and Dieter. Because, of course, Dada’s radical, juvenile theatrics were a direct reaction to what might have felt to its instigators as the beginning of the collapse of the world.

It’s one hundred years this year. Since the birth of a movement who’s remarkably short-lived inception is known perhaps less for its artists’ own names than it’s founding location – the demur Cabaret Voltaire in Zurich. Home city to Dieter and Borris. But the thrust of Hugo Ball’s pals’ anti-art, anti-establishment pantomime spread to Berlin, from its birth in the middle of a continent at war, and ultimately around the globe in a key part of the development of modern art’s new ways of seeing.

Mrs Peach and I dropped into the Berlinische Galerie earlier in the day before the show and found ourselves at Dada Africa – a look at how the anthropological and ethnic influences of the continent shaped some of the language (and non-language) of Dada, as a cultural lever to starchy imperial Europe, perhaps. The perfect set-up to an evening just up the road in a post-industrial space being filled with stories, sounds and colours, collaging and juxtaposing influences and cultural post-its from around the world. The promo film of the exhibition even looks and sounds a little like part of the show.

Yello have always delighted in drawing on a sense of such oddness. Yet, with no loud agenda. All are welcome to drop into their pocket universe. To take a step to one side of ordinary life, music, work. And after all these years of buying their LPs, I think I appreciate them now more than ever – because they demonstrate something important to me.

Without noticing at the time, I learned from Yello that the coolest thing anyone can do is utterly ignore any attempts to be cool. As an artist, this is especially crucial to one’s work – for fashion and audience figures are significant factors in making a living. Getting to do what you want to do. But Yello have only ever made music on their own terms – pursued the creation of an instinctively true world unmapped by any other artist. No one sounds like Yello to this day. In tone, in craft, in approach. In sheer untainted joy of sound. They make music that sounds like the art of a chef – exquisitely designing each detail of a fine meal. Like a way of living. Like they’re inviting everyone to a feast. And I love them for all this.

A critic from the Berlin Times was at the first ever show from Yello, on the Wednesday before we saw them. And this particular writer fairly savaged it. Saw it as boring and un-innovative. And when I read this after (thankfully) we’d seen them for ourselves, I felt a heavy heart. Because we’d bounced out of the angular old Kraftwerk Berlin with sheer joy. And the entire upstairs gallery, filled with lord knows how many hundred for a fifth night, seemed to feel the same. Like most people there had brought the right eyes with them, through which to see Yello. But this writer hadn’t.

Yes, beauty and joy are in the eye of the beholder. But Yello helped to give me these eyes.

I think so many of us were predominantly just made happy to see our friends. There they were, these indefatiguable heroes of joy-art. Right there with us at last.

THE SUN… EVEN MORE BEAUTIFUL.

Yes, I was surprised at the lack of Dada. I did think the show would be madder and a little edgier. Though I was also oddly heartened privately that the Yello live set up is strikingly like the, ah… well, the Momo live set-up – computer mix, synths, front person doing daft voices, brass section, drums, percussion, additional guitar and the odd guest vocal. Minus the budget for thousands of space-filling fans and a ten-meter screen of graphics, obviously. It was… familiar to me, let us say with an emoticon smile. But the show had a strangely calm lack of theatrical madness. No swooping entrances, no cloak-swirls and tap-dancing, no bicycling fish. And somehow, this didn’t disappoint. It actually impressed me in a different way.

What Borris and Dieter brought to the show was a touching humility.

They could have bombasted through their set and gurned grotesquely like a true Berlin cabaret. But instead, Dieter’s charisma played second fiddle to his upholding of his stage members – deferring to the guests, the partners, the other talent and most of all to his friend Borris. And it filled me with warmth.

The sound of the show was clear and clean and what you’d hope from Yello’s immensely crafted mixes. Nothing distracted. All the musos on stage delivered all they needed to with aplomb and skill and a sense of fun. Yes, this isn’t music about the bass end – but they aren’t quite another 80s band suffering from the Great Low Frequency Drought of that decade. When they use tropes and ideas from anywhere, including the dancefloor, it is always to make something that keeps the interest moving. Carries you through a sense of story. “Something more than music going on” as Carl Cox supposedly put it. Undoubtedly why I’ve never gotten bored with listening to them.

But the thing to really sing out of the show was how much these two older chaps still appear to love working together. How relaxed they were with one another. It was fraternity in art. Just loving what they do, no matter what the cool kids see or hear.

There is a picture of the two of them on the inside sleeve of Borris’ recent Electrified collection of extra-Yello pieces, where Borris kind of winks to camera in that forties screen idol way of his while Dieter simply tips his head forward against his friend’s ear with eyes closed in the deepest look of comfort and affection. And when I think of that picture now, I kind of well up. I’m sure they can go into any routine at the drop of a hat for the cameras, but that’s still partnership – to make something so committedlly idiosyncratic and beautiful together, and still look like you’re finding joy in it. And finding boundaries to push. That… is inspiring.

If the world needs anything right now, it is play. A little joyous intervention. Some disruptive silliness.

We walked home feeling strangely loved up. Not just at seeing musical heroes, and in the inspiring streets of Berlin of all places. But at seeing artists loving something of life after so long. Putting propellered colanders on their heads for publicity photos in what should be more dignified years, some might say. Maybe it helps that I am reminded of another favourite Swiss person when I think of them – my uncle Peter. As human and warm hearted a person as you might ever meet. Or maybe the fact that putting a propellered colander on his head is exactly the kind of thing my dad would do. I was given a good example from the crib.

And then Caroline said something simply: “Y’know, after forty years, these two are still pushing themselves from their comfort zones. That’s a testimony.”

Maybe that’s the spark of excitement I took from this. Because if you haven’t wanted to face the stage before, why choose to take the leap into the spotlight in your sixties and seventies?

Love of art. That’s why.

Sure, record sales too. Fine. But for Yello, even as two canny businessmen whose biggest hits score the yuppied 80s, I’ll bet that stuff comes second to play. And possibly third to a really great dinner.

That’s one table I want to sit at. x