I may have said it before. I mean, that’s likely, right? On anything. But I do like autumn. And one of the reasons I like the back-to-school season where I currently live is that a few things conspicuously cultural happen. But this year, I was lucky enough to boob about the fringes of something additional on Bournemouth Arts Autumnwatch – Inside Art. A pop-up network of galleries across one weekend in Southbourne, from fine art chums Six Projectspace.

If you’ve not caught it or my sharing of it before, Six was originally a micro white-cube gallery in Rumelia Lane, bang in the heart of Boscombe. Founded by fine artists Theresa Bruno and Sarah Grace Harris, with Sarah’s husband filmmaker and writer Mark VK of 612 Media, for eighteen months that little space saw new original work curated or commissioned every week. Every single week. It was energising.

Artists from a range of disciplines put work into Six and as the network of people meeting through the name grew, the team decided it was time to close the commitment of a dedicated space and go roaming. Which our dear chums Mark and Sarah literally did, moving their home from round the corner to Sheffield. Sad for friends at the weekends, but happy for expanding the network of creative connections.

Since then, Six has produced various pop-up events as well as fostering young talent. It’s been one of the most quietly exciting arts projects to come out of Bournemouth – so when I heard the team was planning a weekend of open studios in my back yard, I simply hollered: “J’need any help?”

Inside Art was a bit of a revelation, I think. For everyone involved. Certainly for me. For, while I had no thoughts to attempt to gatecrash any work into any of the spaces myself, I did rather want to cheer on those curating the spaces and meet some folk I’d only heard of up until then. And curation was the interesting twist in this project, for while all bar one of the venues were artists’  homes, each location was a themed collage of talent and work, not simply a chance to gawp at people’s studios. Fascinating as this can be.

The revelation appeared in a number of ways, I think. Mainly, I heard a lot of the artists sound actually surprised at how many of them were on each other’s doorsteps without realising. The meeting and sharing sense of Inside Art was probably the primary win for everyone, including me. My involvement at the fringes turned into four little introductory films to the spaces, where I popped out to meet some of the artists behind the venues. 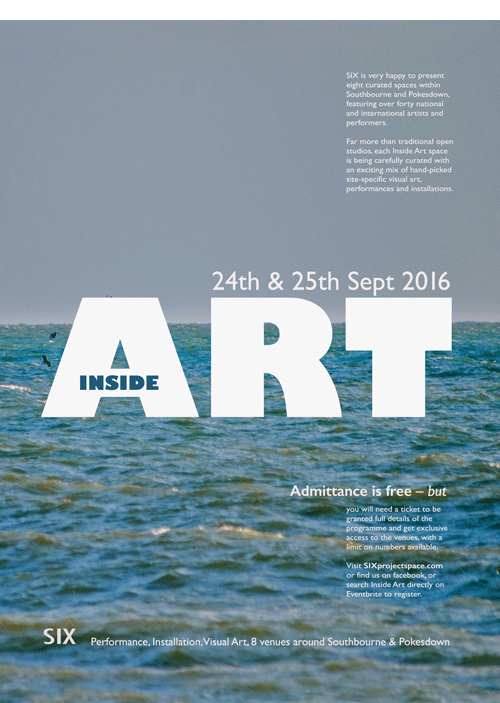 The sculptor Rebecca Newnham, whose fluid use of hard materials such as glass, bronze and concrete explores often scientific themes through large-scale nature-istic forms, shared her collaboration with filmmaker Lizzie Sykes, Allusion – whose own choreographic screen work shared as part of Rebecca’s Inside Art curation Edge was beautifully human. Rosemary Edwards and Ineka Vanderwal presented a collection of artists under the title Nothing Exists In Isolation, with Rosemary’s own fabric exploration of where inside meets outside creeping around the house and garden like a friendly multi-coloured virus. And Ineka’s brooding large painting Coil is something I could sit in front of and meditate upon for an hour.

Meanwhile, former circuits class chum Denise Poote opened up her and husband Chris’ home under the title Shift, 3, with a selected host of drawing, sound installation, performance and projection work – including a bit of a favourite for me personally from the weekend, the sublime and ever-personable Language Timothy, evolving their gently playful broken-toy ecclecticism into Denise’s understairs cupboard for the beautiful, immersive Spandrel.

Finally crossing paths properly with Lucy Turner, herself a sort of living crossroads of dynamic creative knowledge in Bournemouth, was also rather a highlight for me, as she presented some of her video work in Velo Domestique – a very friendly bike shop run by fine art grads that sells locally roasted coffee and gorgeous lunches and in no way adds to the ‘hipsterification’ of Southbourne, as I pointed out to bandmate and neighbour Martin.

And then there was the revelation of Woodside Studios, whom I didn’t get to with a camera before the weekend, even though it’s right along the road from my local CoOp – the shared home of a splendidly diverse group of artists like Oya Allen and Mark David Lloyd and Noel Holmes. Oya’s warmly beautiful organismic abstract paintings in the Ephemera series encript art “as excavation”, exploring “the unifying of impermanence.” While Mark’s work, bringing some of the energy of his street art history into painting and video pieces, such as The Singularity, looks squarely, or rather roundly, at “the unknown… confronting what it means to be human”.

Or the revelation of Scott from Big Top Heartbreak playing a solo set in the kitchen of writer Nell Leyshon, to say nothing of his preacher in a shed. I’ll just leave you to even ponder it.

But perhaps the main revelation for me, in the end, was how all of this jolly nice creative sharing and co-creating and encouraging, all pottering distance from the Momo studio, actually illustrates something taking much of my thoughts at the moment. New ways of seeing our economy. Believe it or not. Because, while everyone involved is looking for commissions and sales and, y’know, ways to pay the rent and generally stay alive and independent, talk of it came way down the list of objectives – behind getting to share work, meet other artists, develop the local scene and find new collaborations.

If art is indeed the creating of new ways of seeing, might ordinary artists in my own back yard be already helping to shape how we see the future?

A basically brilliant couple of days, co-inciding with the biennial Dorset festival Inside Out (don’t get confused) this year bringing pieces to the beloved meadows of Hengistbury Head on the same weekend, between them showcasing too many artists for me to mention. Such projects certainly do make something out of nothing – including an expectation of future things.

One thought on ““Inside Art” from Six”