One of Momo’ commissions in 2012 was a fun little eight-part TV show for Naked Flame in Australia – but for this project, Mr Peach couldn’t rely on squelchy synth noises and silly voices to get him through.

When TV cook Lyndey Milan approached Momo:tempo to score her new culinary travel show, it was clear that the need was… not for the UK south coast producer’s ‘usual’ sound. If there actually is such a thing.

Lyndey & Herbie’s Moveable Feast features Lyndey and spice expert Ian ‘Herbie’ Hemphill traveling some of the back roads of New South Wales and the east coast of Oz in a rare Holden convertible – Edna – attampting to follow the path of local food “from paddock to plate” and to meet many of the real characters producing classic regional dishes and original food down under.

“Musically, this doesn’t sound much like goofy electro-pop, does it” says Momo.

“The brief was to create a pleasantly sawdust & dirt kind of musical vibe. Some typical Momo little tunes for sure, but arranged to sound more like a local blues band jamming out than some English chap twiddling synth nobs in Bournemouth. ..So I called in help. Obviously.”

LISTEN TO THE MOMO:TEMPO MOVEABLE FEAST PLAYLIST ON SOUNDCLOUD

Long time amigo and maestro partner, Kevin Marshall, has worked with Momo before many times, but long before there was a Momo. A guitarist particularly at home with rhythmic folk influences and the odd touch of popular Nashville, he seemed the obvious choice to join Mr Peach in the Momo studio over the summer.

“We’ve long called him Sweet Strings, and for good reason. This project was a great excuse to muck about musically with Kev again” says Timo.

The end result is certainly not driven by the beats or any kind of soundtrack to a club loo queue. “Under the bonnet, it’s still very Momo – it’s all fun little tunes. But it sounds fairly organic and untechy” says Momo.

SAWDUST SESSIONS
“I’d essentially work out some very simple chord progressions or a little hook and Kev and I would play around with getting the parts down, so I could arrange them into fuller neat on-screen moments. The whole pallet of sound is nicely acoustic in different ways, and my take on rural Australia – which has a definite influence of the American frontier about it, but with a more intimate, friendly something to it. Aussies live in a gigantic and fearsome landscape with all the drama and posturing of a Saturday afternoon shopping trip to a West Midlands ASDA. They just get on with it with the odd dead-pan put-down. At least, in my head. Brilliant.”

The tone of the show is very friendly and light, being a cookery show, so the tunes are meant to be nothing taxing. But the score also features the voice of someone from the family – Lucy Milan, Lyndey’s daughter.

“That was a very nice touch, to get Lucy down to the studio” Timo smiles. “When the guys at Naked Flame expressed an interest in a theme song, not just tune, I set about the notepad, briefed with the challenge to “sing from Edna’s perspective”. Yes the car. The end result is oddly affecting – and Lucy’s particular character of voice was luckily perfect for the light but very slightly edgy fun of the piece. We spent the summer singing it.”

One of Kev’s own pieces made it into the show too – Do Bad And Dah. “That cat can swing when he wants to” says Mr Peach of Mr Marshall. “He kindly let me use its cheesy bosa brilliance and writing a melody over it was easy and enormously pleasing.”

With more lush strings appearances by Pete Whitfield, the final album, were there to be one, would be a cute car-ride soundtrack through the country. Or a particular country at least. Lyndey & Herbie’s Moveable Feast first aired autumn 2012 on Food TV Australia.

To hear a playlist selection of pieces from the show, click to Momo’s Soundcloud page here. 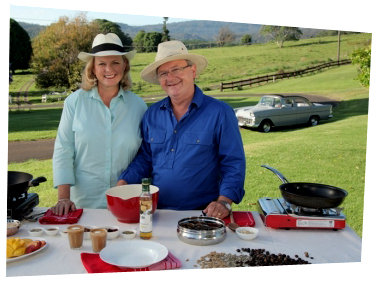