Conflict. You might think there’s a lot of it about. A lot of shouting and trolling and hooting and standoffing. Some macro narratives dooking it out across media platforms. And you might be wondering where best to pile in, and where best to rather more wisely find somewhere to wait while it all blows over. I’ve always said that, come the revolution, I’ll make sure I’m first against the wall.

Lately, I’ve been to a couple of very special events, in venues right next door to each other. Both are creative events that concern themselves with ‘truth’ – even though no one organising either of them would be so pompoous as to put it like that. One of them is just starting out, one of them is coming to an end. And both have made me think about the conflict going on across all the platforms people are currently squabbling on, like some Black Mirror version of Donkey Kong, and one way you could look at it – the apparent conflict between human artistic needs and human financial ones.

Well why is it closing? And why do they love it?

Freeway is a monthly night of poetry and a general creative safe space, echoing venue host Mark’s general cultural aims for every night of its week. A place where wordists and beatniks and beatboxers and slammers can try their work out and encourage others by simply being quiet and allowing them space to be heard.

Allowing them space to be heard. Strangers. And even friends. The result is always a very mixed bag of voices – first timers, older rhymers, street preachers, chilled bean eaters, elders, betters, younglings, ne’er-do-wells and poppets. Dark horses and light shiners. And everyone gets their turn. In a space that you simply couldn’t replicate, because it’s a space made by hand as a one-off, decorated a little differently every time you go in there, thanks to Louise and the staff – The Winchester. The very pub supposedly honoured by Edgar Wright’s naming of the pub at the centre of his mildly successful cult horror film – you might have heard of it – Sean of the dead. And I think that sometimes, folk who gather at Freeway do half imagine zombies outside, while they huddle in a safe space and and least half listen to each other’s stories of pain and redemption.

The word to describe this is human. The Winchy is human. Naturally, un-cookie-cut, homemade, spontaneous, lived in, human.

People need space to speak. Space to let it out. Face what it really means to be them, when perhaps they’ve not found a place to do it before. For some, this made Freeway a family. For as many others, it was at least beguiling and heart warming spectacle. Doesn’t matter that people come, like me, to just get something out there, or hear their own voice say something strong when they feel anything but much of the time. It’s obvious that people have a need to be this truthful and feel this safe in a friendly rabble. I think you know this. You’re giving me that look. But the point is that not everyone gets it as obviously as you, sausage.

Why is that? And why, if it is so inately human to have to express ourselves in rambling poetry sometimes, as I’m claiming, is our entire economic system supposedly at odds with this? What the hell kind of creature would build a world around themselves that would fit them so badly?

A complicated one, is the answer. One with various stories going on at once in its brain which needs poetry outpourings every now and then to deal with.

It is, in the end, economics that is closing the Winchy. The venue and Mark and Louise and everyone there have created love and a loyal audience, across a number of their nights. They have a reputation for being one of the most creative spaces in the whole of Bournemouth and Poole. People travel to be there, coming back after years. People name things in their films after it. People get tattoos of it. What the Winchy lacks is enough money to refurbish a beautiful old locally listed building. And in the end, its landlord can’t watch his investment crumble any longer. Is, I believe, the nubb of it. No matter how much he may like Mark and Louise. A more gentrified drinking establishment with a good food offer will pay to revitalise the building. Hippies and bass heads ultimately won’t, even though they all part with money to be part of it.

So I ask: Why the hell do our economics not simply support such vital things as human creative exploration?

Well, you may know that. But the irony of it is that is it creative control that’s lead us to where we currently are – storytelling. The stories of growth at all costs. And it’s cost us. The real question for you, you old art revolutionary you, is what do we do in the face of such huge odds?

Well you know that too. We write new stories.

Two weeks before this, I was next door in Canvas, at Open Sauce #3. It’s an open door, same as Freeway, but intended to attract folk who may only have flirted with the more creative ends of businss and rather fancy a little more of that action. The Silicon Beach sand in your sensible shoes. A spot of TED bleeding into the local chambers of commerce.

There, the words coming from everyone are surprisingly themed also. Around truth. Not telling stories that are porkies – or even just aspirations. Be who you are in business and find the right audience. It sounds calculated, but it’s really just high-brain catching up with heart. Reaching for the other side of the U but finally allowing yourself to slide down it first. For as in business, so in private life. Because it’s all… what? Human.

It goes at odds with what generations of us have been taught waking hour to waking hour. In meetings with very clever, curious souls for what I am currently working on – even this week – I hear the same thing. People waking up to who they really are. And it revolutionising the way they see, well, everything. And how they do business. What IS it that we value – and how?

There surely must be ways of consiously chenging what we invest ourselves in. Because as someone once said reasonably famously, where your treasure is, there is your heart also.

Freeway Poets might have come to the end of its current incarnation. Art, as life, has to evolve. But nine years of stories in that beautiful, un-branded space of The Winchester is a mighty testimony to the strength of feeling in a town like Bomo that has been starved of ‘culture’ – change is wanted. Change is needed. It is, in the end, a need. And it’s the kind of change that could change, in the end, everything.

We are the revolutionaries. But it starts inside. It is revolution in the way we see ourselves that’s needed – for every last one of us. Spaces like The Winchester, nights like Freeway and Open Sauce, they are crucial catalysts for that change – nurseries of thought. And what is the point of the nursery?

To grow. So that one day, we might launch out over the garden walls and join the real fight. The true fight. The human struggle. The struggle to find love. For only love can build the future.

Realising you have to give love in order to find it is the business places like these are really in. Teaching you that love is a sword. Kindness the sharpest steel in the battle for our shared story.

If you heard Wrong John Silver close out his set lastnight, you will now spit your tea out at this in the face of my worthiness there. But I tell you, everyone still felt the love behind the filth. And I’m not even joking.

Thankyou Winchy, for changing my town, and helping us move a few steps towards a human future. Who knew that’s what you were doing? I think maybe you always did.

Because all over the walls of the venue, it came into focus for me eventurally, were names. With hearts. Plastering the place. Single pieces of paper with… recognition. People seen. Identities. And only as I was leaving did I notice. I may not have been first against it, but despite how few times I’ve put myself up front at Freeway, there on the wall, amid the others, was mine.

Here’s to getting into the next adventures. The new stories of us. 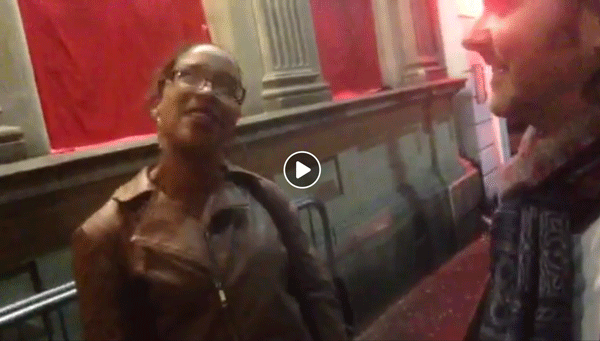 Here is the little Facebook Live I squeaked out, to give you a flavour: